Buckeyes have plenty of talent returning 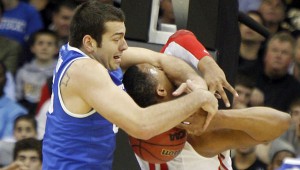 COLUMBUS — In the doom and gloom of Ohio State’s 62-60 loss to Kentucky in the regional semifinals, there was a ray of sunshine for the top-seeded Buckeyes.

Three seniors from a sparkling season would be leaving, but the center of a lot of attention provided some good news.

Jared Sullinger, the national freshman of the year and a 6-foot-9 building block inside, said he was returning next season.

“I’m a man of my word,” Sullinger said in the moments after the disappointing loss Friday night. “I don’t change my mind for anything. I’m happy to be an Ohio State Buckeye and play for Coach Matta.”

Coach Thad Matta was almost speechless after the defeat. But he had to be encouraged that Sullinger was coming back instead of becoming the fourth Ohio State big man in the last five years to jump to the NBA draft after one season.

Sullinger, junior shooting guard William Buford, and freshmen Aaron Craft, Deshaun Thomas and Jordan Sibert will make for a blockbuster core for the 2011-12 season. Add in another Matta recruiting class, typically ranked among the top five nationally, and the Buckeyes should be prepared for another big season.

In the moments immediately after the defeat, of course, Matta could only think about what had been lost this season. The defeat to the Wildcats, on Brandon Knight’s 15-foot jumper with 5 seconds left and Craft’s hand in his face, marked Ohio State’s second close loss in as many years in the Sweet 16. A year ago, the Buckeyes fell to Tennessee.

Make no mistake about it, the Buckeyes lose a lot. Senior starters David Lighty, Jon Diebler and Dallas Lauderdale represent one of the most successful classes in the school’s 112 seasons in the sport. In his five seasons, Lighty was a part of 129 victories, a school record, while Diebler leaves as the Big Ten’s and Ohio State’s most prolific 3-point shooter.

“You think about starting on October 15th and it’s March 26th, you hit three bumps in the road,” Matta said of his team’s 34-3 mark. “All three teams we lost to this year were at some point ranked in the top 10 in the country. When you have a group of guys that take care of their business the way they are supposed to, you know, they are not problems off the court, they are a joy to be around in practice, it’s hard. It’s hard. I mean, I have to be honest with you, as I told them, I don’t know what to say after the game.”

Looking ahead, Sullinger is the key. He had 21 points and 16 rebounds against Kentucky. He averaged 17.2 points and 10.2 rebounds a game — a nice starting point to build a team around.

Buford, who is expected to return for his senior year although he has not made it official, will take on even more responsibility offensively. Greatly improved in man-to-man defense, he will need to iron out some of his erratic offensive play. In Newark, he was just 2 for 16 from the field — despite many good looks — and it was his rushed 3-pointer in the final seconds that clanged off the rim, sealing the defeat.

Craft, who came off the bench but was clearly the team’s dependable point guard, will officially be stamped as the floor leader next season. One of the best defensive players in the nation, his role will expand on offense. With Diebler and Lighty gone, he’ll need to keep defenses from collapsing on Sullinger by becoming more of an outside-shooting threat.

Thomas was used as instant offense by Matta. In order to get in the starting lineup next season, he’ll have to make more of a contribution at the other end of the court. Sibert showed promise during the season, and with a good offseason should develop into a lockdown defender along the lines of Lighty, in addition to adding points from a swingman spot.

The recruiting class, much like a year ago, offers some intriguing possibilities. It includes three quality big men — 6-10 Amir Williams from Birmingham, Mich., 6-9 Trey McDonald from Battle Creek, Mich., and 6-8 LaQuinton Ross from Jackson, Miss. — who will be battling for playing time backing up Sullinger or opposite him in the frontcourt. Rounding out the class are 6-2 guard Shannon Scott, Georgia’s Mr. Basketball, and 6-6 wing Sam Thompson from Chicago.

Clearly the cupboard isn’t bare. The future is bright. But that doesn’t ease the sting of the Buckeyes’ painful setback.

One of the big reasons Sullinger said he was returning was that he didn’t want to go out on a losing note.

“We don’t like the taste we have in our mouth right now,” he said. “Losing is not what we do, and it’s not what we accept.”