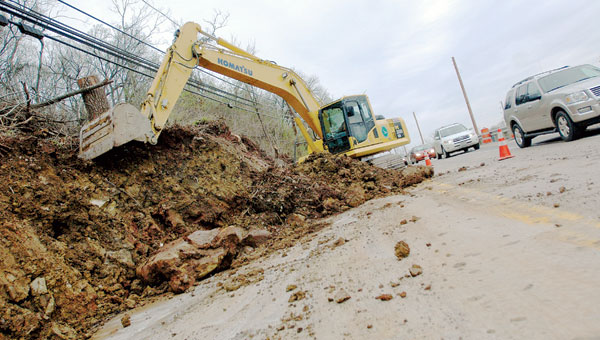 (ABOVE) Motorists slowly make their way along Rockwood Avenue in Chesapeake as workers from the Ohio Department of Transportation spend Saturday afternoon removing and clearing away part of the hillside. Substantial rains have caused the hillside to slip.

CHESAPEAKE — And the hill keeps a tumblin’ down. That’s what happened over the weekend as state road crews hauled more than 140 loads of dirt and debris off of Rockwood Avenue.

Ohio Department of Transportation maintenance crews had pulled 70 loads off the roadway Thursday only to have to do it all over again the next day.

“It had moved back onto the road,” Chesapeake Mayor Dick Gilpin said. “It was causing people to go across the center line.”

That brought crews back again on Saturday when they brought heavier equipment to dig into the hillside.

“They decided not to wait until something drastic happened (on Sunday),” the mayor said.

The hill slippage has plagued the village for almost a year, but accelerated during the recent heavy rains. One of the challenges has been that although Rockwood Avenue is a state highway, that portion in the village limits is the responsibility of Chesapeake.

To bring in ODOT’s help, Chesapeake had to declare a state of emergency, which the village did Friday night by ordinance in a special meeting where four of the six members attended. The legislation passed unanimously.

“By being a municipality, we are responsible for the road,” Gilpin said. “Since we do not have the resources or equipment to do that kind of work, we had to make a request to the state.”

More than a week ago an ODOT geotechnical engineer and crew from District 9 Chillicothe headquarters began assessing the situation and possible solutions. Right now ODOT is in the process of finishing up paperwork needed to start conducting core drillings into the hillside to determine the type of material there, according to Kathleen Fuller, spokesperson for District 9.

On Wednesday afternoon ODOT moved the lanes closer to the riverside with barrels and signs to allow for the temporary cleanup on Thursday. At that time a track hoe was used to remove material off the road and clean it back to the edge line. On subsequent clearings traffic was reduced to one lane.

“We were able to have both lanes working as soon as they were finished the work both days,” Gilpin said.

Frontier is getting ready to move phone lines from the hillside across the roadway.

“The phone company has set poles on the other side with new cable,” Gilpin said. “They are waiting for it to come in. Everybody has phone service. We have been able to manage the hill so it doesn’t affect the line.”

Late Saturday afternoon ODOT brought in a power shovel to work on the hillside.

“They should be able to dig into the hill a little more,” Gilpin said. “If they move the hill back farther, it will take more time to come out.”

The International Order of the Rainbow Girls is offering people a chance to honor servicemen and women and help veterans... read more