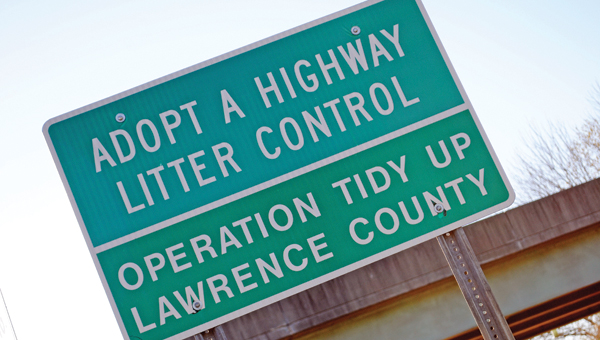 Several times a year, volunteers get together to pick up trash along the roadways between the Sixth Street bridge and the 31st Street bridge in Chesapeake and Proctorville. the tribune/jennifer chapman

PROCTORVILLE — In 2005, Tonya Wilson was working at Curves in Proctorville. Billie Smith showed up to work out, and in conversation, Smith asked Wilson if she thought the litter in Lawrence County was bad, to which Wilson said yes. The two decided to do something about it.

That’s how Operation Tidy-up Lawrence County got its start.

Several times a year, volunteers get together to pick up trash along the roadways between the Sixth Street bridge and the 31st Street bridge in Chesapeake and Proctorville. The next Operation TLC will be from 9 a.m. to noon Saturday. The starting point is the Chesapeake Community Center, where volunteers will be given an area to clean, as well as supplies and even a T-shirt for first-time volunteers. Donuts and coffee will also be served.

Wilson moved to the area in 2003, and Smith spent some time outside of the area. Wilson said that might be why she and Smith saw the need.

“I think when you live here, you kind of get used to it or immune to the way things look. When you come with a fresh set of eyes it think it makes it stand out even more.”

Wilson said this time of year is always a little more difficult because of the debris from the winter months, but this time could be especially challenging because of the recent high water.

Last year, the group had more than 200 people for the combined cleanups and picked up more than 550 bags of litter along 40 miles of roadway.

She said signing up as a group can be a fun way to include several people and spend time together making the area clean. She encouraged groups like scouts, church groups, businesses or other organizations to join together to help pout.

Wilson said she had some luck what she has found over the years during Operation TLC.

One year, Wilson’s friend found a brand new box of carving knives from Elder-Beerman. The price tags said $40 and were in great shape. A little farther down the road, Wilson found the adapt same set.

Another time, Wilson remembers her mother who came to town from Pike County, Ky.

“We had been cleaning along the bypass for quite a while. Jokingly, she said she was going to pray to God to find a chair to sit down on,” Wilson said. “She found a chair in the weeds,” she laughed. They took a picture to remember the event.

Having a good time while helping out the community is something that makes everyone win, she said.

After this weekend’s Operation TLC, the third annual Lawrence County Cleanup will be May 7.

The Lawrence County Sheriff’s Office is investigating a shooting that left three people with minor injuries over the weekend. Officers... read more