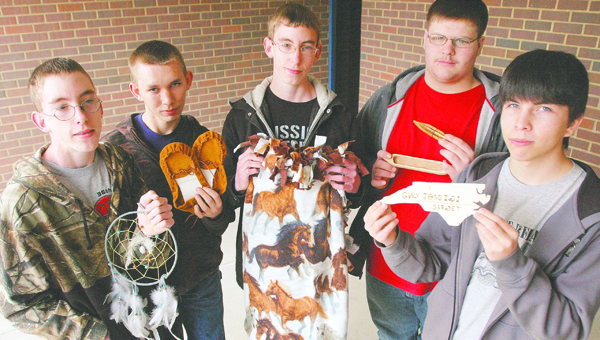 GETAWAY — A group of juniors from Collins Career Center is asking the community for a little help for a big field trip.

The students in the class, The Rise and Fall of the Cherokee Nation, have planned a trip to where else? Cherokee, N.C. But before they can make the trek on May 5-7, they are having a community yard sale to raise funds on April 9.

Dan Harmon, teacher for the class, said he has always been interested in the Cherokee, which is why he started the class this year. His father is Cherokee and Harmon said he spent a lot of time in the area in Western North Carolina.

During the year, the students made dream catchers, necklaces, small wooden canoes, blankets and moccasins.

“They learned about the hunting tools the Cherokee would use, the blowguns, the tomahawk, the different type of arrows,” Harmon said.

One of the students, Michael Munyon, a boy scout, shared some of his knowledge of the Cherokee culture that he learned from Ohio University professor and scout leader, Dave Lucas.

“I had Dave come out and demonstrate a bunch of stuff,” Michael said. “Some dances and regalia and all that.”

During the trip, Harmon said the students would be visiting several historical sites as well as people in the community.

They will see Cade’s Cove, Mingo Falls, the Cherokee Museum and the Oconaluftee Indian Village where the Cherokee will show the students how they made their traditional beads, canoes and log cabins. They will also visit Cherokee Central High School where they will sit in on a traditional Cherokee language class.

The yard sale will be from 8 a.m. to 2 p.m. on April 9 at Dickess Auto Repair on Sixth and Ninth streets. During the sale the students will also be taking food donations to give to the MANNA FoodBank backpack program in Cherokee.

Harmon said the class and the trip are important ways to remember the culture of Native Americans.

“It’s an important part of history that has been left out of the history books,” he said. “The beginning of history here was the Native Americans.”

In about a week the wait will be over. That’s when the Republican Central Committee will choose the replacement for... read more