Rolling to a new location 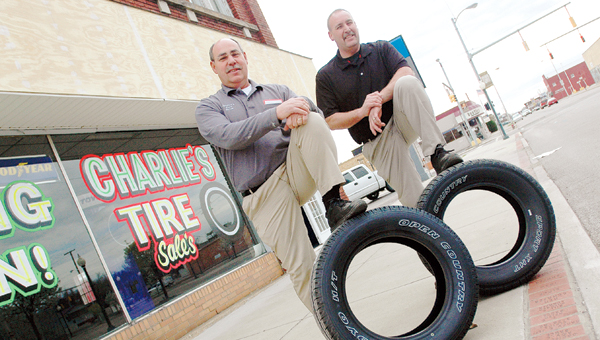 Mike, left, and Charlie Haas, right, will be rolling their way to South Third Street in the next couple of weeks as they plan to relocate Charlie’s Tires to the location of the old Jeep Integrity building. THE TRIBUNE/JESSICA ST JAMES

A longtime Ironton business is moving to a new location.

Charlie’s Tire Sales is moving from its Second Street location to the former Integrity Jeep building at 413 S. Third St.

“It’s bittersweet,” said Mike Haas, who owns the business along with his brother, Charlie Haas. “We’ve been here for 43 years. “On the positive side, we’ll be able to bring more cars inside to work on. (We’ll) have a larger space for inventory and a much larger working space. (We’ll) probably actually more than double our current space that we have in this building.”

The Ironton-Russell Bridge replacement project forced the business to find a new location.

The State of Ohio acquired by eminent domain a sidewalk in front of the business.

“In the future we will not be able to cross the sidewalk to have access to our building,” Haas said.

The state has required the business to be out by June, but the owners are planning to be out much sooner than that. They plan to move within the next two or three weeks.

“The way we were situated now, three or four cars would make us look like were really busy,” Haas said. “People tend to drive by and come back at another time, where there we’ll have cars inside, we’ll have a large parking area, so plenty people can stop in and get the work done rather than delay it for another day.”

The new space will also have a waiting area that’s separate from the work area.

Besides the space, it will also offer more visibility.

“Being in business 48 years now in a small community, people are pretty aware of who you are and where you are but this will give us more exposure to traffic that’s coming across the Ironton-Russell Bridge,” he said.

With more space, Haas said the business is considering expanding to offer more services. They are waiting to see what they have space for before they make any decisions.

The state is assisting in the move. It will either compensate the business for the move or pay a moving company.

“If we do move ourselves, which is a possibility, we’ve been very fortunate with different business and individuals offering us use of forklifts and box trucks,” Haas said. That’s a good thing considering there are about 1,600 tires to be moved to the new location.

“The community has really come behind our business. Customers have offered me the use of anything they have.”