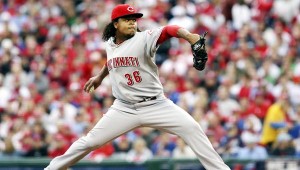 Pitcher Edison Volquez will get his first-ever opening day start when he takes the mound for the Cincinnati Reds Thursday against the Milwaukee Brewers. (MCT DIRECT)

CINCINNATI — A pair of fuzzy blue gloves sat atop the pile of fan mail on the corner of manager Dusty Baker’s desk, a sure sign that opening day was at hand.

And not just any opening day.

The first game of the season will feature plenty of cold air and extra fanfare for the Cincinnnati Reds on Thursday. They’ll celebrate their National League MVP and their first division title in 15 years.

Then, the pitching-improved Milwaukee Brewers — one of the teams poised to try to snatch that NL Central title away — will try to climb into first place on the first day.

“In truth, it doesn’t matter who we’re playing,” Reds second baseman Brandon Phillips said. “I don’t care if we were playing the Pirates. It really doesn’t matter. You’ve got to go out there and win.”

Both teams worked out in snowflakes Wednesday, a numbing reminder that spring training was over and the cold reality of the regular season was one day away. The forecast for the opener was dry skies and temperatures in the 40s.

Better use those gloves.

“We came from like 90 degrees yesterday,” Reds starter Edinson Volquez said, referring to the final spring training game in Arizona. “We flew back last night, and there’s snow today. It’s kind of different.”

Something else’s that’s different: The city has something to celebrate.

The Reds hadn’t been to the playoffs since 1995 and were on a nine-year losing streak before they broke through last season, then got swept by Philadelphia in the playoffs. Opening day is always a big occasion in Cincinnati — kids skip school to watch the annual parade through downtown with parents who take time off work.

First baseman Joey Votto will be honored for his MVP award during the pregame festivities, which will include a fly-over by Air Force jets.

“Oh man, they need to go ahead and just make this a holiday in Cincinnati,” Phillips said. “This is what it’s all about. I love opening day. People who haven’t experienced this are really missing out.”

While the Brewers and Reds worked out amid snowflakes on Wednesday, the thin videoboards that show the NL division standings were glowing above the right field stands. They displayed the Reds’ wishbone “C” stop the NL Central.

The Brewers were listed third, right where they finished last season with a 77-85 record. They upgraded their pitching staff by getting right-handers Zack Greinke and Shaun Marcum, giving themselves a lot more pitching to complement one of the league’s top offenses.

Greinke cracked a rib while playing a pickup basketball game in the offseason, ending his chances of starting the opener. Right-hander Yovani Gallardo will pitch instead.

“We’ve got a great team here,” Marcum said. “As a pitcher, you don’t have to go out and put up zeros every inning. If we do things the way we need to do, we will be pretty good. These guys can hit. We will be fun to watch.”

It’s only the second time that the Brewers have opened the season in Cincinnati. The other time was a memorable game in 2000 — Ken Griffey Jr.’s first with his hometown team after coming over in a trade with Seattle. It rained that day and the game was called as a 3-3 tie in the sixth inning.

Those who have been in the game for most of their lives still find opening day special because of all that surrounds it and all it represents, no matter how wet or cold the day.

“You remember the opening day Little League parade,” said Baker, who will participate in his ninth opening day in Cincinnati as a player or manager. “I do. It’s the best game.”