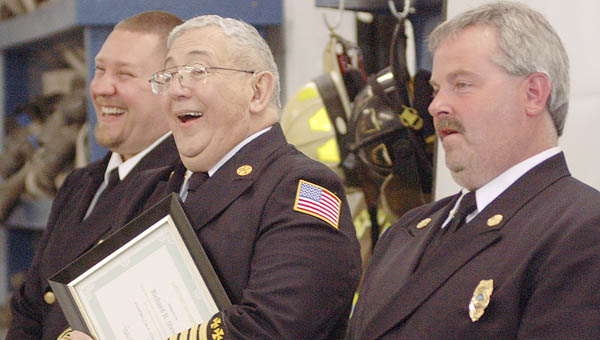 Chief Richard Stevens of the South Point Fire Department remembers being 15 years old, just a freshman in high school, and hearing the sirens waking him up all hours of the night. He decided if he was going to be up because of it anyway, he might as well join the volunteer fire department.

Stevens is now retiring after close to 52 years experience as a firefighter.

The South Point Fire Department chose to honor him at his last meeting as chief this week, presenting him with a lifetime membership to the fire department. Stevens looked at his years with the department with fondness.

“It was enjoyable,” Stevens said. “It was an expensive hobby.” He said at the time he started volunteering as a firefighter, the firefighters were responsible for providing and replacing their own clothes, totaling as much as several hundred dollars a year.

While Stevens admits he has had hard times and fun times, there are some memories from his time with the department that he can’t forget.

From chasing a greased, 100-pound hog and ultimately breaking two of his ribs in the process, to discovering a good friend lost his life after getting stuck in the sewer plant, Stevens has found the department to be a big part of his life.

He also remembered saving the life of a doctor near the fire department.

“He smoked like a fiend,” Stevens said. Someone came to the department right before a fire parade and told him the nearby trailer was on fire. At first, Stevens thought it was a joke, but sprung into action when he realized it was real.

“I ran over and opened the door,” he said. He found the man in the floor, unable to move, and got him out just in time.

Stevens said the job has been both stressful and fulfilling.

During Tuesday night’s meeting, each member of the fire department shared memories of their time with Stevens.

“I hate to see him go, and I’ve tried to talk him out of it,” said Assistant Chief Mark Goodall. “I will truly miss him. He’s a good man.”

Debbie Stevens, firefighter and Stevens’ daughter, agreed that she doesn’t want him to leave. Her biggest memory at the department with her father was when he finally agreed she could join.

“All the years I wanted to be a fireman and he didn’t want me to,” she said. “When I got cancer, he said if I could beat that, I could beat anything.”

Captain Steve Baker has been at the department for almost five years.

“I’d like to thank him for all he’s taught us, and for being here whenever anyone needs him,” Baker said.

Some with laughter, some with tears, memories were shared about Stevens’ humor, his kindness, his support and his encouragement.

“I’ve been here long enough and it’s time to get other people in,” Stevens said. “I’ve dedicated my life to helping my fellow man.”

Stevens admits he will still be around whenever anyone needs him, but he also has plenty to keep himself busy.

It won’t all be work though, as he wants to have some time to play.

A man who allegedly tried to kill his girlfriend has pleaded not guilty by reason of insanity. Calvin Carter, 53,... read more