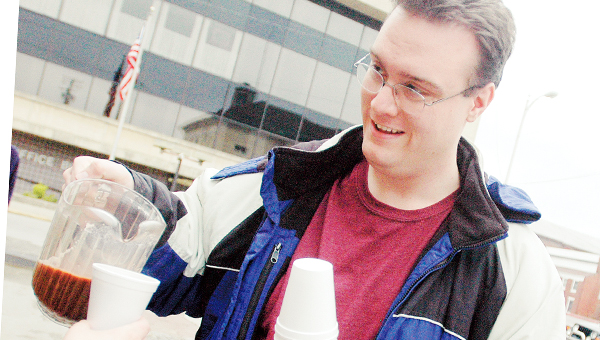 Jason Sharp, youth pastor for the First United Methodist Church in Ironton, pours out hot cocoa to those waiting in line to see family at the Lawrence County Jail Thursday afternoon. THE TRIBUNE/JESSICA ST JAMES

It came about by just looking out the front door during one of the hottest days this past summer. And what Jason Sharp, one of the pastors at First United Methodist Church of Ironton, saw has become a one-man ministry, reaching out to families many have shunned.

Last year the church had a massive surplus of bottled water, left over from a special event it held at the Ironton High School football stadium. All those cases of water were just taking up space in the church’s parish hall.

“I saw people lining up at the jail to go visit their folks and they were burning up,” Sharp recalled.

So Sharp thought he found a good use for those extra bottles and started handing them out to those waiting in line. Week after week he went out to the families. Now every Thursday during the evening visiting hours Sharp is a regular, going up and down the line talking to those waiting to get into the Lawrence County Jail.

However, at the beginning this gesture of goodwill wasn’t always accepted with keen graciousness.

“‘This isn’t Jim Jones’ Kool-Aid,’” Sharp said he often heard. But as his face became more familiar, his offers were more often accepted.

But Sharp’s motivation is simple; it is one of his ways of following the teachings of his church.

When the weather got cold, Sharp changed his gift to hot chocolate that he makes each Thursday night at the church before heading out to the jail with a pitcher and a bunch of Styrofoam cups.

“I will see the line up to an hour before the visiting time at 5:30,” he said. “I have gone over there and emptied an entire pitcher and gone back to the church and made new.”

Often those waiting in line will share stories about the family member in the jail.

“They will tell me I am out here because my boy made a mistake and did something stupid and this is much appreciated,” Sharp said.

Sharp, who is co-director of the children’s and junior high ministry at First Methodist, is usually only at the jail for about 20 minutes. But it is 20 minutes that is well-spent, he believes.

“The church is all about saving people and sending them to heaven, but if the church neglected this side of heaven we neglect one of the reasons Jesus came,” Sharp said. “It was to set things straight on earth. … there is life before heaven. We are supposed to bring the kingdom here on earth, helping people make the right choices, supporting people to make the right choices. If they never step a foot into the church, at least we have done something to make them have a right relationship with God and the rest of humanity.”

While it is still a one-man ministry, Sharp would like to see it grow.

“I would be thrilled to have anybody join me,” he said.

Two Lawrence County World War II veterans will be honored for their service to their country as the county commissioners... read more