Ironton trio rise to the challenge 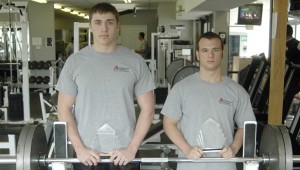 In the words of Julius Caesar, “Veni, vidi, vici.”

Translation: I came, I saw, I conquered.

That wasn’t the plan when they arrived, but that was the result as Ironton’s Austin Rowe, Tommy Saul and Codey Jones competed in the Kurt Angle Challenge and Franco Harris Challenge at the Arnold Schwarzenegger Sports Classic March 3-4-5 in Columbus.

The three Ironton High School students decided at the last minute to enter the competition and they accomplished more than they expected.

Austin Rowe— a sophomore in the 15-16-age division — was not only the Kurt Angle Challenge winner in his age group but the overall winner as well.

Both are juniors and all three play for the Fighting Tigers’ football team.

All three finished their competition on Saturday and left the Nationwide Arena and did not return until Sunday when they discovered the results.

“We came in early the next day and John Jones (Codey’s father) yelled at Austin to come over to the awards’ area,” said Saul.

Not only did Rowe win the competition and a first place trophy, but he also receives a $2,500 scholarship when he enters college.

The trio do workouts at school and also at Tri-State Rehab and Preferred Fitness in Ironton. They have utilized the F.A.S.T. program as well. However, they did not do any special training for the Arnold Classic.

“We didn’t train for it. Codey was going and he tried to get some others. Me and Austin decided to go,” said Saul. “We didn’t know what kind of things they do. We just showed up and they told us what to do.”

Jones said the events weren’t done a little different than they were explained in advance making it a little more difficult.

“We didn’t train and we didn’t really know what they were going to do. I just tried to do my best and see what happened,” said Jones.

Not only didn’t the boys know what to expect, Rowe was selected to go first in the competition.

“I was the first one in my age group so it was nerve racking. I just tried to do the best I could,” said Rowe.

In the Kurt Angle Challenge, competitors get one minute in each event. Rowe had the most repetition in the bench press. Competitors must list 70 percent of their body weight as many times as they can in the time limit.

Saul won the 17-19-age division in the Franco Harris Challenge that is geared more toward football skills. The age division includes college students and the competition included a group form an ROTC military school.

The bench press is done on Smith machines, not free weights.

Saul ran a 12.1 in the 90-yard shuttle run and had a distance of 31 feet to win the kneeling 3-pound weighted football throw contest.

Other events were passing and catching.

“I didn’t do well on the passing and catching, but I did pretty good on the other events,” said Saul who is a two-way lineman.

“The Franco Harris Challenge is more about lower body power and explosion. Half the kids in the competition were college kids.”

Another Schwarzenegger Classic will be held in Pittsburgh at the end of May.

“I’m planning on going to Pittsburgh. I’m going to train a little bit more for it, but I’m still going to do my football workouts,” said Jones.