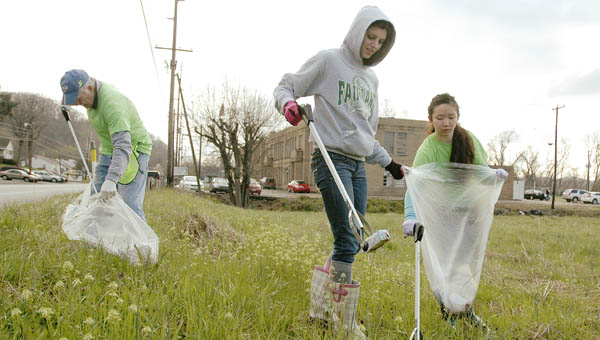 CHESAPEAKE — Lawrence County’s eastern end is much cleaner today than it was Saturday morning.

At least that was the goal of a volunteer effort to pick up litter along the roadside in the Chesapeake and Proctorville areas.

Dozens of Operation Tidy-up Lawrence County volunteers, most of whom donned neon green t-shirts, met outside the Chesapeake Community Center to arm themselves with litter pickers and buckets, rubber gloves and plastic bags. Then, after some instructions, a prayer for protection and a cheer, they took to the roadside to clear away the litter.

But as founder Billie Smith pointed out, Operation TLC is about more than just ridding the area of an eyesore.

“This is a lot more than picking up litter,” Smith told the group before the work started. “It’s becoming a part of the community. We’re going to be a part of the solution instead of part of the problem.”

Smith, who started Operation TLC along with Tonya Wilson, said litter is a huge problem in the area. With recent high water, that problem was only made worse.

Smith said she expected between 50 and 70 volunteers in all. Among them were high school students and youth from the Lawrence County Juvenile Center.

“We lead by example in hopes that our students will see the importance of being a servant,” Smith said.

“I think this is a really good program,” volunteer Julia Wu said. “We always get a lot of trash and you can always tell a difference when we’re done.”

Wu and her friend Megan Ashton were two of the Fairland High School students who volunteered.

“I just like that everyone comes together to help out,” Ashton said.

Chesapeake Mayor Dick Gilpin, who was part of the volunteer effort, said the event offers people of all ages and backgrounds a sense of community and accomplishment.

“You couldn’t get this diverse a group together for anything else,” Gilpin said. “They’re working for a common cause.”

And though the litter will likely always be a problem, Gilpin said, “If it wasn’t for this organization there would be a lot more trash in this area.”

Ironton trio rise to the challenge