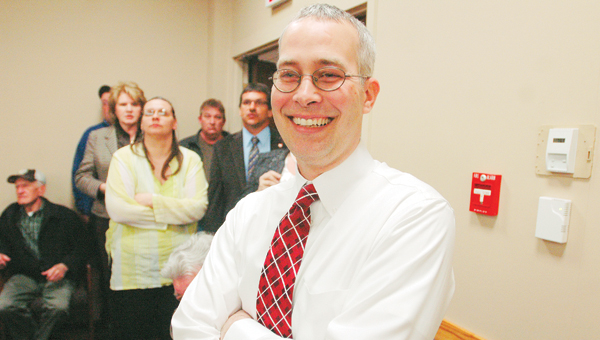 Bill Pratt grins ear to ear as he reads the final vote tally that shows him to be the new Lawrence County Commissioner Tuesday evening. Pratt is replacing Jason Stephens who became county auditor in March. THE TRIBUNE/JESSICA ST JAMES

By 9:10 p.m. the vote was in with Chesapeake dairy farmer Bill Pratt beating out Proctorville businesswoman Marsha Imhoff with a vote total of 45 to 28 with 1 blank ballot.

“I’m shocked really,” Pratt said as he stood in the courtroom of Common Pleas Judge Charles Cooper, the site of the vote Tuesday night. “It was a very difficult night but very rewarding.”

Now Pratt will take his place on the Lawrence County Commission filling the seat left vacant when longtime commissioner Jason Stephens was elected county auditor in the November general election. Since Stephens, who is a Republican, had just under two years on his four-year term, it was up to the Republican party to decide on Stephens’ replacement.

The first ballot knocked two of them out of contention with Pratt and Imhoff tied at 20 votes and Lucas inching ahead with 21 votes. Rules were if there were a tie for second, the top three would face off in a second ballot.

That ballot ended with Pratt pulling 25, Imhoff 26 and Lucas 23 pitting Pratt and Imhoff in a third ballot.

Emotions were high after the final tally with well-wishers shaking hands with Pratt while other party members embraced Imhoff and her sister Cheryl Jenkins in the hallway.

Pratt will hold the seat until the November 2012 general election when he and commission president Les Boggs will face the voters.

PEDRO ­— A Rock Hill High School teacher has been placed on administrative leave as the district and the Lawrence... read more