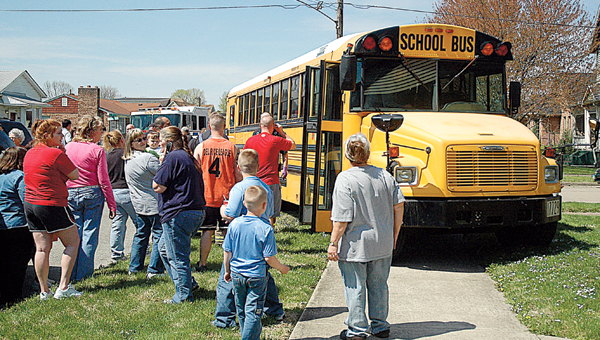 Parents wait eagerly outside an Ironton school bus to collect their children following an accident after school Thursday afternoon. Though shaken up, neither students nor the bus driver was hurt in the accident that occurred at 1503 South Fifth Street in Ironton. THE TRIBUNE/JESSICA ST JAMES

No injuries were reported when an Ironton school bus carrying elementary students was involved in an accident Thursday afternoon.

The incident happened after school just past the intersection of Maple and Fifth streets. The bus appeared to have run off the left side of the street where it stopped in a yard at 1503 S. Fifth St. It ran over a road sign in the process.

According to witnesses and the bus driver, Homer Woodburn, the accident was caused when the driver was looking back at the children and he veered off the side of the road, Ironton Police Chief Jim Carey said.

Woodburn was cited for failure to control. He was also tested for alcohol, Carey said.

“There’s no indication that there was any alcohol,” the chief said.

Parents of the children came to the scene to pick up the students and another bus transported the students who were not picked up, said Superintendent Dean Nance, who arrived at the scene shortly after the incident happened.

All of the students were seen by the district’s registered nurse before they left the bus.

“I want to praise the kids for how well they behaved and held their cool during a stressful situation,” Nance said. Nance added that he thanks the first responders who came to the scene as well as the parents for their cooperation.

Woodburn will not be working pending the outcome of a police investigation and a drug and alcohol test, Nance said.

The bus driver declined to comment on what happened, saying he would like to get permission first from a supervisor.

When the accident happened, Ironton resident Ryan Meeks was standing in the street at the corner of Ellison and Fifth streets. He said he was talking with one of the parents of a student on the bus while keeping a watch on the traffic on the street. He looked up to see the bus had stopped in the lawn.

“He didn’t have any car or anything that he had to swerve,” Meeks said.