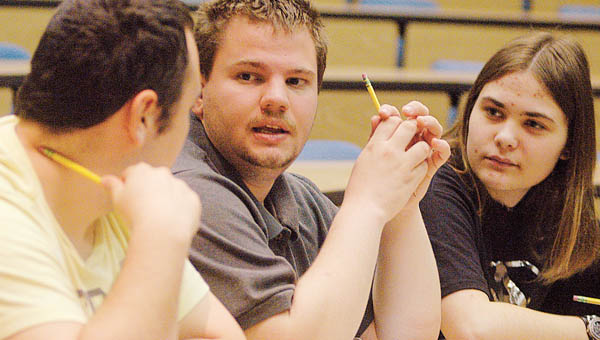 By noon, as hot dogs were on the grill for a picnic lunch, the contenders in this spring meet of the Kentucky Collegiate Quick Recall League were comparing notes about the first half of Saturday’s competition.

As in the past Ohio University Southern, the only Ohio college in the league, played host to their counterparts in Kentucky for the day.

Already Murray State University players found OUS team a worthy competitor, according to Maurice McClellan, who is studying biology and Japanese at MSU.

“I like this because it gives you the opportunity to draw on all the useless trivia knowledge that I have,” McClellan said. “Stuff I very rarely used but is good to know.”

There are four players on each team who take on 40 questions a match done in a round robin format. Subjects can range from math to history to social studies.

This was the first year for Justin Kelly, a junior at OUS, to compete in the league, although he had competed in comparable matches while at Ohio State University. Kelly is in the nursing program and finds his strongest subjects are math and popular culture.

“It is a friendly competition and a great way to meet new people on college campuses,” he said.

The OUS academic team practices once a week to keep their skills sharp on a variety of topics.

Even though it has a competitive atmosphere that can create some nerves for players, most find the matches relatively easygoing. Like Lucas Harbolt, an OUS sophomore studying electronic media.

Harbolt, the vice president of the OUS academic team, sees his strengths in pop culture and literature.

“It is just a nice friendly atmosphere,” he said.

Estep gets 10 years for child abuse

By Lori Kersey The Tribune A Proctorville man was sentenced to 10 years in prison Friday for assaulting 2-year-old son.... read more