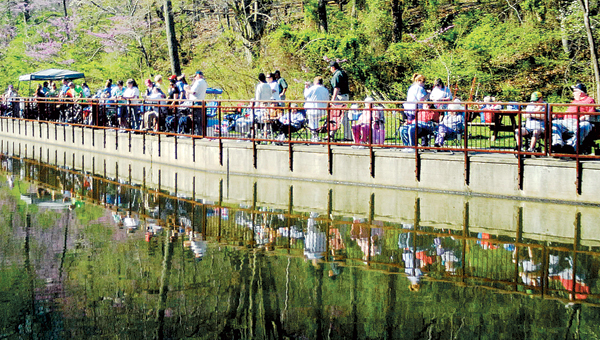 Fishing pole firmly in hand, he waited for the big one to come along and take the bait.

With limited mobility, 75-year-old Cochran does not get to fish very often, though he loves to.

“I can walk some. I just can’t negotiate steep banks,” the man said.

Cochran was just one of the many people who took advantage of the Wheelin’ Sportsmen Fishing Day Thursday. The event, sponsored by the National Wild Turkey Federation and the Wayne National Forest, is a chance to fish for those who normally wouldn’t be able to because of their age or a disability. Handicapped accessible boardwalks lined the lake.

“It gives folks an opportunity to get out and enjoy the outdoors,” Larry Kingrey, president of the South Hills Longbeards Chapter of the NWTF, said.

Kingrey said about 400 people and another 100 volunteers were expected to attend the eighth annual event.

“It really is a community effort in that we have several different organizations that get to help us with this,” he said.

Kingrey added that with blue skies and warm temperatures, the weather this year was much better than it has been some years.

“This is about as good as it gets,” Kingrey said. “We just thank everyone for their help and support and hope everyone has a good day and everyone catches a fish.”

During an open ceremony, the Lawrence County Commissioner Bill Pratt read a proclamation naming the day in honor of the event.

Following the ceremony the Ohio Department of Natural Resources Division of Wildlife, stocked the lake with 2,650 trout — more than twice the number the division typically brings for the event.

Jami Taylor was one of the many people hoping to catch one of those fish. The 36-year-old Ironton resident is undergoing rehabilitation at Jo-Lin Health Center for injuries sustained during a car accident.

“I just like getting out in the sun and having a good time with everyone,” she said.