‘A Gathering Storm’ at the Highlands 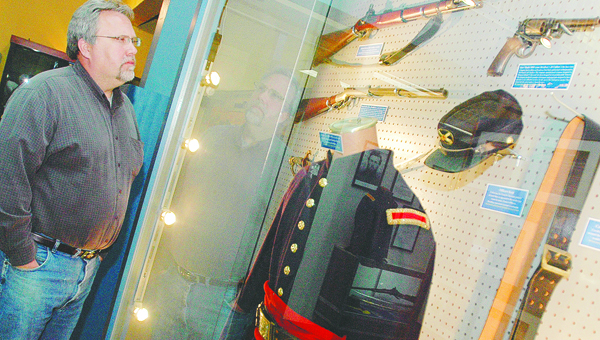 Gary Wollenhaupt, of Russell, Ky., looks at a display case of Civil War memorabilia during the opening of “The Gathering Storm” Civil War 150th Anniversary Exhibit at the Highlands Museum and Discovery Center.

While it is not common to encourage children to hang out in places with cannons, mortars and bayonets, this is an exception.
In honor of the 150th anniversary, “The Gathering Storm,” a Civil War exhibit, is on display at the Highlands Museum and Discovery Center in Ashland, Ky. Visitors can see weapons, some authentic and some replicas, along with uniforms and historical information at the museum from now through October. The ribbon-cutting for the exhibit was Friday. 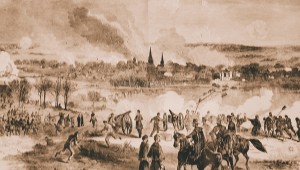 A print of the Bombardment of Fredericksburg, Va., is currently on display at the Highlands Museum and Discovery Center.

Museum board member Vincenzo Fressola said what makes this display unique is the regional emphasis.
Marshall Steen, exhibit curator, museum board member and owner of Steen Cannon and Ordnance Works in Ashland, Ky., said, as the anniversary of the Civil War came closer, he was asked about doing the exhibit. His answer? “Absolutely.”
Steen has been reenacting the Civil War since he was 10 years old.
“The Civil War, to me, is the most important part of our American history,” Steen said. “It defined the nation we would become.”
The exhibit contains an original cannon. Several pieces of clothing and accessories are available to view, including a beehive-style slouch hat, coats, a saber bayonet, a Civil War surgical kit, a canteen and cavalry boots, to name a few.
While the complete exhibit will be on display through October, parts of this exhibit, with new additions each year, will stay on display through 2015.
“We hope this will bring in a lot of students and people interested in the Civil War,” Steen said.