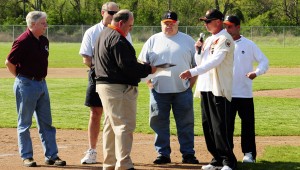 As players, coaches, fans, family and friends gathered for the dedication of the Ironton High School baseball field in honor of Mike Burcham, former player Juan Thomas said it best.

Standing by the dugout prior to the ceremonies, Burcham shook his head at Juan and his wife Lori and said, “They’re telling lies on me.”

Thomas cocked his head, looked at Burcham and said, “I doubt it.”

Those who know Burcham and played on his teams recalled some of the moments that caused them to take time out of their schedules to attend the dedication in his honor.

“He set up the itinerary that year and he had the schedule and practice times for the sectional, the district, the regional and the state before the tournament began. He knew what we were capable of he made us believe we could do it,” said Payne.

But not all of Burcham’s tactics were in a kind tone. He would encourage players and pat them on the back, but he knew there were times when they needed to get mentally and physically tougher.

“I was having a bad game and I’m standing on deck and coach Burcham walks by. He says, ‘Get a hit. You haven’t done anything all day.’ It gave me a jolt. He didn’t pull any punches,” said Payne.

Burcham let players know that he was running the team, not them, much like Ironton football coach Bob Lutz conducts his program.

“I doubt administrators would give you time to get your program running today if you coached the way we do,” said Lutz who remains the Ironton head football coach and has Burcham as his top assistant.

Jim Tordiff has been a school treasurer, city councilman and mayor during his post-high school days, but the starting second baseman on the 1972 team says his best memories were playing for Burcham.

“You knew where you stood with him. He was honest with you,” said Tordiff who was wearing his old high school jersey.

“How old is that?” Burcham asked looking at the jersey. “They had holes in them back then.”

“It’s 40 years old and falling apart,” said Tordiff, and then laughed, “And on top of that it’s shrunk.”

Jay Wylie, a good friend whose son Scott played for the state title team, shook Burcham’s hand before the ceremony.

“There are a lot of stories about Mike Burcham and a lot of them you can’t print, but there was never a better coach or person,” said Wylie who often calls Burcham by the nickname “Midnight.”

“He always had the kids’ best interest at heart. He was tough on them, but he cared about them and they knew it.”

Juan Thomas was right. The stories were true.

The Associated Press CINCINNATI — Ramon Hernandez got one right there. Looking for a pitch he could hit into the... read more