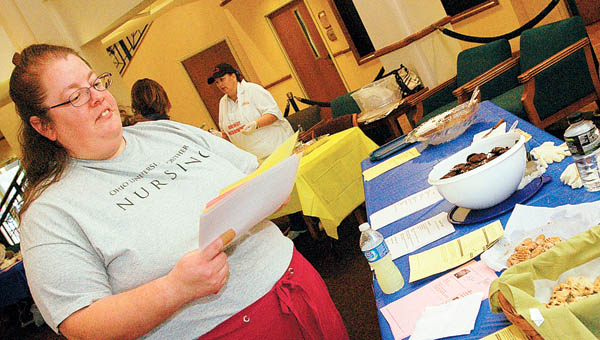 Just because a person has diabetes does not mean they can’t enjoy eating.

That was the message behind an event at Ohio University Southern Saturday.

Both a contest and an educational event, “A Taste of Healthy Eating,” gave diabetics a chance to try out healthy foods and get recipes for the same.

The event was sponsored by the Lawrence County Health Department and the “Diabetes: a Family Matter” program. Participants voted on which foods they liked most. The dishes were prepared and donated by members of the community.

Diabetic educational materials and health screenings were also available to participants from Our Lady of Bellefonte Hospital and Life Scan.

Diabetes: a Family Matter is a program geared toward educating Appalachians about diabetes.

“We do have cultural distinctions that set us apart from other groups,” said Maxine Lewis, health educator for the Lawrence County Health Department. The region has high rates of high blood pressure, cholesterol and blood glucose, she added.

“The population tends to have a lower socioeconomic level and I hate to say this, it’s a lower educational level,” Lewis said.

In Lawrence County specifically, Lewis said, there is a high rate of Type 1 and type 2 diabetes, though people do not often talk about it.

Lewis recommended that diabetics watch what they eat as well as their portion size, exercise and do not smoke. Checking blood sugar as often as recommended by a physician is also encouraged, she said.

Emma Berger, a 24-year-old diabetic, volunteered for the event with the health department.

“I think it was really good because it’s hard to find (diabetic) recipes that everyone likes,” the nursing student from Kentucky said.

This is the first year and Lewis hopes that next year’s event is even bigger.

“We hope to make it an annual event,” Lewis said.