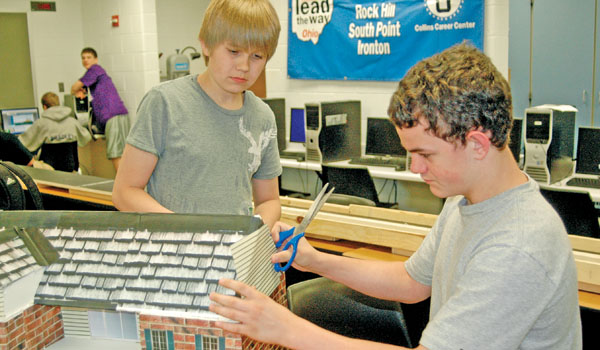 Dylan Maynard and Wyatt Burns put the finishing touches on a house they designed.

CHESAPEAKE — Jearl Sasser jokes he has one of the noisiest classes at Chesapeake High School.

This past Friday it certainly looked like one of the most active as his ninth grade engineering students were anything but quiet as they were absorbing the rudiments of design. It’s all a part of discovering if the world of engineering and design is the career these students want when they leave school.

“This is teaching all kinds of engineering,” Sasser said about his Project Lead the Way class.

The assignment started with each of the 26 students creating their own model residential houses by using a computer added design program. Then the students were put in small groups with each team agreeing on the architectural style house they would create out of cardboard.

“This teaches them to brainstorm and how to work in groups,” Sasser said. “I tell them you may work with people you don’t always like, but you have to work with them.”

Next they took their ideas and turned them into a bricks and mortar, or rather paper and glue, structure.

It was a two-story brick with modified dormer windows that the team of Dylan Maynard, Wyatt Burns, Jeffrey McClelland, Sawyer Stephens and Brian Perdue chose.

“We wanted to go for something like a modern house,” Jeffrey said.

To bring their cardboard shell to life, they Googled designs of brick, asphalt shingles, windows, even a welcome mat, printed them out and pasted them on. Wooden sticks were painstakingly cut and glued to create porch pillars.

Sasser calls his teaching style non-traditional where students spend the majority of class time on hands-on projects. It’s that kind of teaching that appeals to Brian.

“Other classes you just sit there with your book open,” he said.

And it’s the end project that gives Dylan a special satisfaction.

“When you make it look good, it makes you feel good,” Dylan said. ‘You can look at that and say we made it.”

Extinguishing the risks of fire danger

COAL GROVE — It doesn’t take long for a small fire to become a large one. Knowing what to do... read more