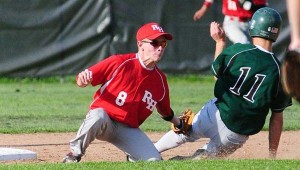 PEDRO — The Rock Hill Redmen knew what they had to do and they did it.

Rock Hill made the plays when they needed including Drew Kidd’s walk-off home run that gave the Redmen a 3-2 in over the Fairland Dragons on Monday in a battle for first place in the Ohio Valley Conference.

“Our kids played a great team game. They hung together and had the confidence they could pull this out,” said Redmen coach Barry Litteral.

“Darby threw a nice ball game. He threw the pitches he needed when he had to and we came up with the plays defensively when we had to.”

Kidd drilled the first pitch over the left field fence as the Redmen improved to 6-0 and 3-0 in the conference. Fairland is now 5-6 and 3-1 in the league.

Devin Darby turned in a complete game for the win. He struck out five and walked two.

Alex Thackston took the loss as he truck out eight and walked two.

Jon Baise led off the game with a triple and Eric Riley followed with an RBI single as Fairland took the quick lead. But the Redmen turned a double play on the next batter and got out of the inning without any further damage.

“That was a big play. It could have been a big inning,” said Litteral.

Rock Hill tied the game with two outs in the third when Jon Schob doubled and Cody Massie singled.

Thackson hit a one-out solo home run in the fourth to put the Dragons up 2-1 but Rock Hill tied the game in the sixth.

Darby led off with a walk, Matt Jenkins had a bunt single, Ryan Depriest hit a fly ball to move Darby to third base and he scored when Jared Bruce grounded out.

Kidd then led off the bottom of the seventh with his home run.