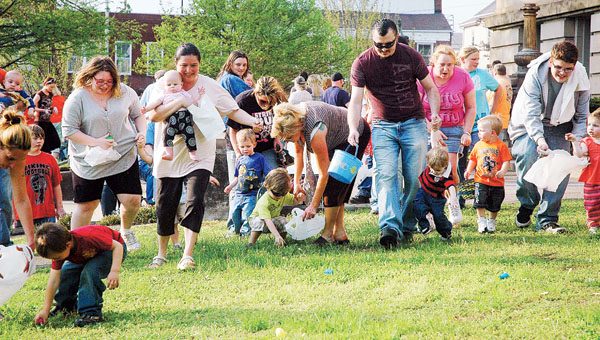 Not just the kids but also the parents hop into action at the sound of the horn.

The Easter bunny wasn’t due for another half hour, but that didn’t keep Caleb, Chase and Colton Blevins from showing up at the Lawerence County Courthouse early and noting where those eggs were hidden.

“I’m going to get a rainbow egg,” Chase boasted. His grandparents, Freddie Jr., and Glenda Bruce waited on the sidewalk and watched the grandchildren with a mixture of amusement and pride.

“We usually bring the kids every year,” Grandpa said. “We used to bring their parents when they were kids and now we’re bringing the grandkids. Now doesn’t that make us feel old?”

The annual Easter Egg Hunt is sponsored by the Ironton Business Association as a way of giving back to the community. Several dozen members of the community and beyond waited for that one chance each year to hunt those eggs and perhaps even meet and greet a fluffy white rabbit.

Jaina Baley, of Ironton, waited as patiently as any 7-year-old could wait. She brought a wicker basket with her, ready for the opportunity to grab an egg or two.

“I got a bunch last year,” Jaina said, adding that she hopes to round up maybe 20 eggs this year.

“I think it’s good she gets to see other kids. Some may not get the chance to have an Easter egg hunt at their school or at home,” her mom, Tawnya Bailey said.

Last year Liam Almekinder was really too young to appreciate the hoopla.

“Last year he was a little scared,” his mom, Jessie, explained. But at 17 months, he toddled around the courthouse lawn and showed this year he was more than up to the task.

The Easter bunny arrived in a sleek red fire truck just before 6 p.m., heralding not only Easter but the start of spring.