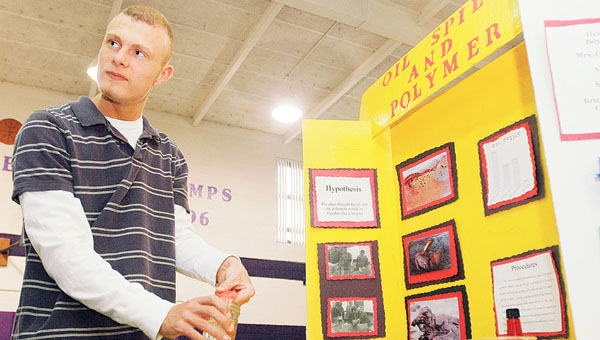 Steve Martin often goes to the beach on vacation and was a bit concerned about the condition in which he would find those white sandy shores, given the massive gulf oil spill a year ago. His inquisitiveness led to a science fair project: Can polymers really be used to clean up oil spills?

They can, but in a spill the size of the one in the gulf, Martin conceded, “It would be too expensive.”

The 17-year-old Open Door School senior was one of 60 students taking part in this year’s science fair. When Kendra Kelley became principal of the Open Door School, one of her goals was to involve the students in projects that were like those in traditional schools. She began alternating science and social studies fairs. This year, science knowledge was on display, everything from mummification to nutrition to soil and water retention. Some of the exhibits were group efforts. Members of Ginger Arthur’s class combined their skills on “Stardust: A Mission To Build A Comet.”

But more than that, the fair was educational, which was Kelley’s point.

“I am hoping they know how to express themselves and how to share their knowledge with other people,” Kelley said. “I hope after they’ve done this, they can sit down with someone and discuss what they’ve learned in school.”

ROME TOWNSHIP — There may be snow on the ground and thoughts of sugar plums dancing in heads, but that’s... read more