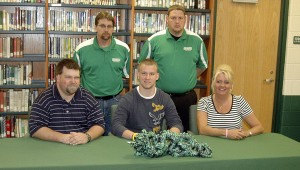 PROCTORVILLE — It sounds like another verse from the old Jackson 5 song, “One More Chance.”

Fairland Dragons’ senior Kyle Lawhorn wasn’t ready to put his football cleats away just yet. Lawhorn was looking for just one more chance to play and he found it with West Virginia Tech.

Lawhorn signed a letter-of-intent Wednesday to play for the Golden Bears.

“I’m glad to have a chance to play,” said Lawhorn. “I don’t know what it takes to prepare for the next level, but I’m very excited. I can’t wait to get there.”

The 5-foot-10, 185-pound Lawhorn played wide receiver and safety for the Dragons.

Lawhorn caught seven passes for 124 yards — an average of almost 16 yards per reception. Defensively he had 34 tackles from his spot in the secondary.

“I hope to get a chance to play (early), but I know I have to earn my way up,” said Lawhorn.

Fairland head coach Dave Carroll said hard work and a good attitude won’t be an obstacle for Lawhorn when he gets to the college level.

“Kyle did anything asked of him. He’s a hard worker and it’s great he gets a chance to continue his career after high school,” said Carroll.

Lawhorn isn’t sure if he will play offense or defense at Tech.

“I’m going to be a wide receiver or a safety. It doesn’t matter. I’d rather be a safety,” said Lawhorn. “The biggest difference I see is the style they play. They run a no-huddle offense and a 4-4 defense. (A 4-4 defense) is what I’ve run since I was in little league. I don’t know anything else.”

Lawhorn decided on West Virginia Tech over several other schools including Ashland University and Capital. He plans to major in mechanical engineering.

“I wanted to go to a place that had the program I wanted and that was close to home. I’m not going to play football forever,” said Lawhorn.

Kyle is the son of Brian and Kathy Lawhorn.