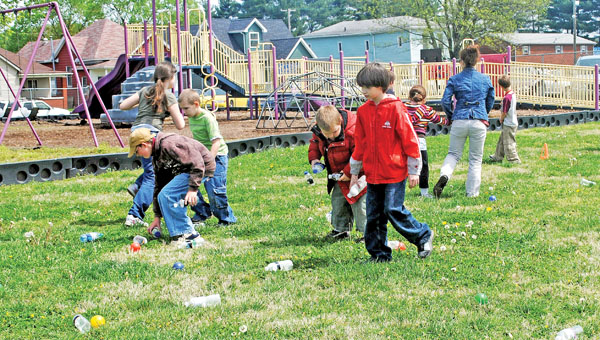 Open Door School students scramble to collect trash and deposit it in the appropriate bin during an activity celebrating Earth Day. the tribune/jennifer chapman

Greg Chaffin used all of his muscles to shovel the first scoops of dirt out of the ground to plant a new Bradford pear tree on the corner of Fourth and Lorain streets at Open Door School in Ironton Thursday afternoon.

Many other students helped him, while still others planted new flowers in pots, in a flowerbed and in front of the Open Door sign.

This was all part of the second annual Earth Day Celebration Activities Day at Open Door School. The students had been learning how to take care of the earth and it culminated in a celebration that included not only the planting, but also relay races on the playground.

Kathy Conner, intervention specialist and teacher, came up with the idea last year and it went so well, they decided to make it an annual event.

“We want to keep making it bigger and bigger,” Conner said. This week the students have learned about recycling, had a recycling contest and made environmentally safe soft-scrub cleaners out of baking soda and a liquid detergent.

“All biodegradable,” Conner said. “Nothing that can harm the environment.” They also instructed the students how to make a safe scrubber from half of a grapefruit and kosher salt. Literature to educate the students further was also distributed.

The classes competed against each other to see which floor could bring in the most recyclable items. The third floor won with 824 pounds of recycled material and will have a pizza party next week to celebrate.

“I planted flowers,” Brooke said. “And we made recycled paper.”

Brooke said they put all the ingredients into a blender and mixed it all up to recycle the paper and then dry it.

Libby Wooten, 18, planted flowers, but especially liked being helpful by assisting a younger student during the activities.

“I learned about recycling,” Libby said.

Aaron Cahal, 18, said his project was a little hard.

“We dug the hole,” Aaron said. Planting the tree took some energy, but the students were smiling and happy to help.

The Lawrence-Scioto Solid Waste Management District has sponsored the event, with Stephanie Helms, education specialist, delivering the trees, soil and flowers to the school and participating in the celebration.

“I feel we need to start with the younger generation,” Helms said. “I talk to them about prevention.”

Helms said litter on the sides of the roads isn’t coming from the children, but from adults, and if this generation of children is taught to care about the earth at an early age, littering will be less of a problem.

“When kids are involved, they get a sense of ownership and community,” Helms said.

Helms wanted to thank the South Point Lowe’s store and manager Justin Wurtzler for donating the tree, the soil and a couple of flats of flowers.