COAL GROVE — Whether it be essay contests or science fair projects, students at Dawson-Bryant Middle School are showing off their academic skills to Lawrence County.

This year, 88 middle school students from the Dawson-Bryant district participated in the countywide science fair. Of those 88, 7 qualified to go on to the district level competition.

“Everything they did they pretty much did themselves,” said Scott Hamm, sixth grade science teacher. “We are really proud of them.”

Hamm said with all the snow days and preparation for state testing, the students showed plenty of motivation and lots of extra at-home work to complete their projects.

“They had to really want to do it or it wouldn’t have gotten done,” he said.

And their projects were just as impressive as their work ethic. 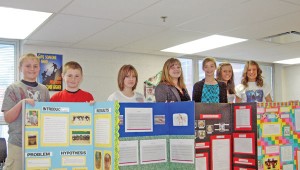 Tori Holmes and Jacy Jones, both eighth graders, collaborated on a project to test the possibility of creating wind energy from cars on highways.

“We tested to see if we could create energy from wind turbines if we placed them on state highways,” said Holmes. “When cars drive by, the wind from the cars would power the turbines. It would power one million homes a year if you placed one turbine every three miles on all US state highways.”

Jordan Lucas and Dylan Malone, sixth graders, tested the effects of pollutants on aquatic plants. Even thought the group wasn’t able to attend the district fair due to surgery for Jordan, they said they would keep at their research and improve for next year’s competition.

Eighth grader Kelsey Koch said she wanted to do the same. Her project measured the height of a jumping horse and if the height of the jump affected its trajectory.

“I had a camera setup on a tripod and I had a friend record the videos,” she said. “I used natural surroundings to determine how far from the jump the horse left the ground.”

Molly Saunders and Sarah Nickel, sixth graders, advanced to the state round with their project on ultra violet light.

The two measured whether artificial UV light is more damaging than natural UV light. To do this they used Petri dishes swabbed with yeast cells and exposed one to tanning bed lights and one to natural sunlight.

“A lot of our family and friends get in the tanning beds a lot,” Saunders said. “We wanted to show them the real dangers.”

Saunders and Nickel will travel to Ohio State University for the state level competition on May 7.

Science isn’t the only area of excellence for Dawson-Bryant Middle School. 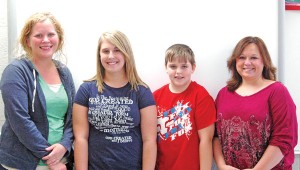 Seventh grader Chase Jenkins and eight grader Danielle Mathes both won first place prizes in their grade level for the Child of Appalachia essay contest. The theme of the essay was to create an invention to solve a problem.

“The purpose (of the contest) was to inspire the kids in the lower counties to write and use their imagination and to use their education for good,” said Kara Harrison, seventh grade English teacher.

Jenkins’ invention was a GPS enabled Breathalyzer that would check the driver’s blood alcohol level to see if the driver is capable to drive safely. If the driver is under the influence, the ignition would lock and GPS would notify family of the driver’s location.

Mathes said she would invent an advanced type of diabetic pump.

“It does the same things that a normal pump does but it has a glossary of foods with a carb count and it keeps extra sugar in case your sugar gets low,” she said. “It’s more convenient than carrying around everything else.”

Middle school principal, Rick Barrett, said he was proud of both the students and the teachers for excelling.

“It’s a great honor and privilege that their work was considered to be some of the best in the state and our county,” he said. “It’s a compliment to their efforts and their teachers efforts. I very pleased with it.”

Open Door School students scramble to collect trash and deposit it in the appropriate bin during an activity celebrating Earth... read more