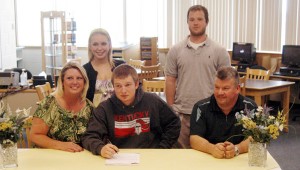 SOUTH POINT — All Josh Hamm ever wanted was to play college football.

After signing with the Kentucky Christian University Knights on Thursday, Hamm got what he wanted.

The South Point Pointers 5-foot-10, 170-pound senior wide receiver said had has wanted to play at the next since he could remember.

“I like Kentucky Christian. It’s just a small campus. It’s not local but it’s close enough to come home.”

Kentucky Christian hired former NFL wide receiver Mike Furrey to be the head coach and Hamm is impressed by the first-year head coach.

“He’s been there. He know what he’s doing. He knows how to get it done,” said Hamm. “He’s running a spread right now. He might change things up, but he knows what he wants.”

Hamm is hoping to flourish in the spread offense. The Pointers threw for just 381 yards but Hamm led the team with eight receptions for 102 yards and he had two touchdowns.

Regardless of the offense, Hamm knows it will take a lot of work to play at the next level.

“I’m going to have to get in the weight room for sure. I have to step it up,” said Hamm. “You have to prove yourself. You don’t have a name. You have to make a name.”

By JIM WALKER Tribune Sports Editor PEDRO — It was a pressure-type game and the Rock Hill Redwomen put the... read more