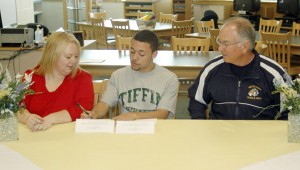 Mitchell was impressed with Tiffin head coach Jeremy Croy who has guided the Dragons to nine straight winning seasons.

“It was the school I liked the best. I liked the area and I liked coach Croy,” said Mitchell. “They’re getting a new indoor facility that will be done when I get there.”

Running at the next level will require more training time for Mitchell.

Mitchell — who has been clocked at 11.1 seconds in the 100-meter dash — credits his success in track to head coach Randy Smith.

“He’s the best coach I’ve had in anything,” said Mitchell.

Smith had nothing but compliments for Mitchell.

“One of the things that stands out the most are other coaches and retired coaches who come up to me and say how much they enjoy watching him and how he does things with class and doesn’t lose his temper,” said Smith.

“He’s been a joy to coach and one of my favorites over 30 years. You ask him to do something and he does it with no questions asked.”

At Tiffin Mitchell is expected to compete in the long jump as well as the 50- and 60-meter dashes during the indoor season and the 100 and 200 meters as well as relays during the outdoor season.

Before Mitchell is finished with his high school career, he has set a goal of reaching the state track meet. The main event of his concentration is the 4×100-meter relay that includes Trey Campbell, Jacob Adkins and Josh Payne.

“That’s a goal. We’d want to get to the state meet,” Mitchell said.

Mitchell plans to major in a sports marketing.