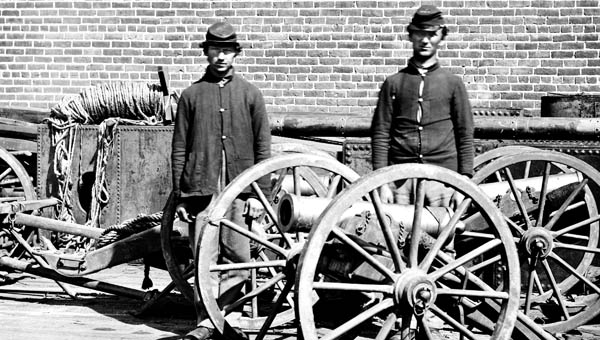 The bugle is a wind instrument used by drum and bugle corps. It is sometimes used by bands for patriotic music. Armies made use of bugles for centuries to prepare men for battle.

Bugles have no valves or keys, thus some difficulty may exist in playing the bugle at first. Bugles date back into history more than 2,000 years, but did not assume their present shape until the earliest part of the 19th century. What would the Boy Scouts of America and our United States military have done without bugles and buglers?

Musicians were found in both Union and Confederate armies to call out directions for duty and formations and movements in Civil War battles. Men were given directions by infantry, cavalry and artillery buglers.

The infantry relied more on drummers than buglers on the field. While in camp, a Civil War soldier made responses to a minimum of 19 bugle calls each day. If a soldier in the cavalry or artillery, one might hear more than 25 calls per day.

The day began with first call at 5 a.m. This was “Assembly of Buglers” to be followed by “Reveille.” The day would be concluded with “Assembly for Dress Parade,” “Stable Call,” “Water Call,” “Supper Call,” and “Roll Call.” “Taps” ended the soldiers’ day at 10 p.m. Mandatory lights out. The Union and Confederate armies used almost exactly the same bugle calls.

Of all the military bugle calls, none is so well-known or brings more personal emotions than “Taps.” “Taps” undoubtedly is the most famous bugle call in the United States. It consists of 24 notes. How the call originated and evolved has brought much controversy. At 9 p.m., regimental bands would play “Tattoo,” after which the soldiers’ roll would be called. Thirty minutes later came “Taps,” which meant that everyone must be in bed and extinguish lights. One origin of the word “Taps” states that the call was played by a Civil War drummer, not a bugler.

Butterfield did not compose our “modern” version of “Taps” from scratch. In July 1862, after the battle of Malvern Hill while the Union army was in the vicinity of Harrison’s Landing, Virginia, Major General Daniel Butterfield called a bugler into his tent one night after the bugle call that sounded “extinguish lights.”

The bugler, O.W. Norton, 83rd Pennsylvania, listened as Butterfield whistled a new call. Butterfield, not satisfied, kept revising his whistling. After he was satisfied, Butterfield told Norton to write the version down and he did so on a used envelope.

Norton was told to use the “new call” in place of “extinguish lights.” Other buglers in the camp heard it, played it, and then the whole Army of the Potomac used it—the version we call “Taps.” It seems now that Butterfield revised an earlier bugle call that had been used many years before the Civil War.

That earlier call was the last 5¼ bars of “Tattoo,” possibly taken from the French. “Taps” replaced the “Tattoo” call. Butterfield did not compose “Taps”; he transformed “Tattoo.”

Dan Butterfield was not well-liked by most men in the Army. He was a hero at the battle of Gaines’ Mill in 1862. He was awarded the “Medal of Honor” in 1892, but perhaps is best known for his transformation leading to our modern version of “Taps.”

The Confederacy liked Butterfield’s transformation also—its buglers quickly adopted it and first referred to it as “burial music.”

On the track to good habits

I got an email the other day: “Well, I’m the new owner of a chocolate lab pup, even though I... read more