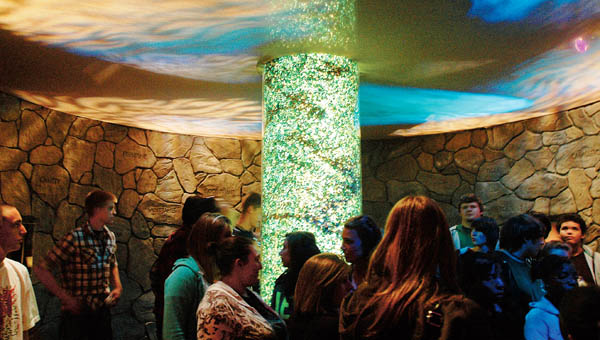 “Amazing Grace” plays as students pass through the Commemorative Room during a visit to the National Underground Railroad Freedom Center. 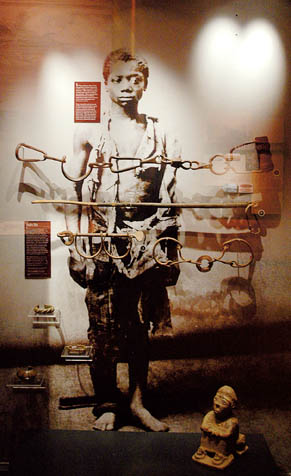 A photograph of a slave boy and the devices used in restraint is displayed in the “From Slavery to Freedom” exhibit at the National Underground Railroad Freedom Center in Cincinnati.

CINCINNATI — They had read about it, but a recent trip to a Cincinnati museum brought the history of slavery to life for Fairland High School students.

About two hundred students and faculty from the school traveled to the National Underground Railroad Freedom Center Thursday.

The trip was the culmination of a series of events and activities made possible by a $10,000 “Choose to Read Ohio” grant from the State Library of Ohio.

The students read “The Lost Quilter,” which is the story of a runaway slave and her journey to freedom. The school recently hosted a panel discussion of the book at Ohio University Southern, Proctorville Center, as well.

As museum staffer James Harrington explained to one group of students during “The Resistance Tour,” slavery has existed ever since there has been written record. But, as he also pointed out, it is not so distant that its ramifications are not still felt.

Within the past few years, a woman — just one generation removed from slavery — died at the age of 114.

“The connections are closer than you think,” Harrington said.

The museum features an authentic slave pen found in Germantown, Ky. The slaves were kept there for a period of time before being marched to Natchez, Miss.

The men were kept chained to the floor upstairs in the structure, which resembles a log cabin. The chains were to keep the men and boys from escaping, which males were known to do more than females.

Though small, the slave pen would have been five or six times the size of a slave home.

For student Donna Davis, the slave pen was the exhibit that most stood out.

“I really liked the old slave (pen),” she said. “It was interesting that you could see what conditions they had to live in.”

In another exhibit, students walked through a recreation of a slave trading port in the Caribbean islands.

Another exhibit was dedicated to those who lost their lives on slave ships that brought them to the New World from the coast of Africa. About 2 million people are believed to have died during this Middle Passage.

The last exhibit the students walked through showcased the horrors of modern day slavery. Called “Invisible,” the exhibit is the first in the United States about 21st-century slavery.

According to statistics from the museum, at least 12 million people are captive to some sort of slavery today.

Child soldiers and the sex trade are just a couple examples of the problem.

For senior Zach Rankin, this exhibit was the most eye-opening.

“The fact that slavery is still going on and the whole last exhibit,” Rankin said. “All the other stuff you more or less learn in history class except that one.”

Besides the museum visit, the grant allowed students to jointly make a quilt in their family consumer science class.

“A lot of them had never touched a sewing machine so it was a whole new experience for them,” McCormick said. She went through the instructions step by step with them and soon they were catching on. The quilt is on display in the school’s library.

Student Nate Kuhn created an 8-minute documentary on the Underground Railroad in Proctorville and Burlington. He said the project was both a challenge and an opportunity to learn more about the history of the community, which is often overlooked.

Media specialist Evelyn Capper said her expectations of the museum trip changed since the time the community read began in December.

At first, she was glad that the students would get the opportunity to see a nice museum.

“It’s bigger than that,” Capper said. “Freedom is something that’s worth fighting for. We still have to continue fighting for our freedom.”

The students learned that slavery still exists today, when runaway children and teenagers are kidnapped and sold in the sex trade, she said.

“I think we’ve kind of protected them from (knowing) that,” Capper said.

Since I took office as Lawrence County Auditor just a little over a month ago, I have been enjoying learning... read more