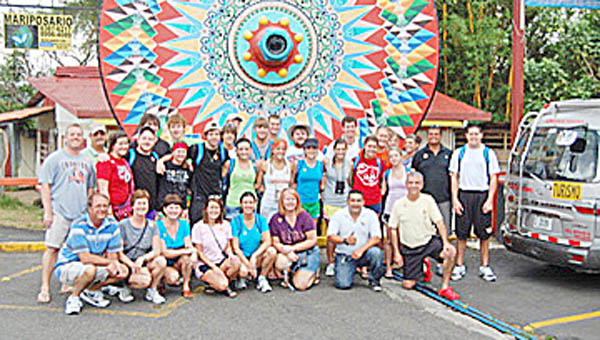 It’s one thing to study Spanish at school. It’s quite another to travel to a country where the language is spoken and try it out for yourself.

That’s exactly what the Spanish III and IV students from Ironton High School did during a recent trip to Costa Rica.

“I wanted them mainly to experience a different culture, food, exchanging money, (and) just interacting with different people,” teacher Carissa Weber said. “Obviously using their Spanish skills, which they tried to do.”

While they were there, the students traveled all over the country, staying in five different hotels.

Senior Kelsey Crowe said it took some time to get used to speaking Spanish.

“It took a couple days to even realize that you had the vocabulary,” Crowe said, adding that during one conversation with a Costa Rican woman it took her a while to catch on to what she was saying. “The more you heard them saying it throughout the time we were there, the easier it got.”

“It took a while to get used to but you started picking up things,” added Schylar Fields, a junior.

While they were there, the students got to zip line high above tall trees and swim in a waterfall. They also got to see two volcanoes.

“We went kayaking in a lake where the volcano was in the background about a mile away,” Weber said.

Another highlight from the trip was looking for crocodiles in a river. The group’s guide found one — a 1,800-pound, 80-year-old reptile named Tyson — and fed it raw chicken.

They hiked through a tropical rainforest and went horseback riding.

The students also got to try some Costa Rican food. Most days they got to have plenty of fresh fruit and juice.

“I had cow stomach soup,” Fields said. “Oh, trust me, it doesn’t taste any better than it sounds.”

One of the most memorable experiences of the trip, the students say, was visiting with a school there.

“It was (kindergarten) through (sixth grade) in two rooms with one teacher,” Weber said. “Most students there are learning some English but these were not because their teacher didn’t know any English.”

The high school students brought a donation of school supplies and English children’s books for the school.

“My favorite part was the school, that was just a big shock,” Crowe said.

“I think it was just humbling seeing how fortunate we are,” student Tommy Waginger said.