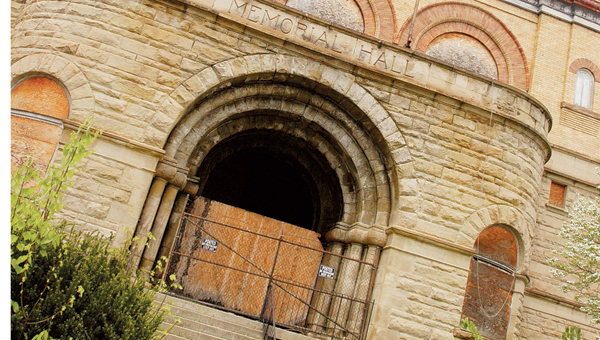 Talks are underway about the fate of the Memorial Hall building located along North Fourth Street in Ironton. An option being debated is tearing down the building.

The City of Ironton is taking steps toward the demolition of Veterans Memorial Hall, a decision that came after members of a local veterans group decided to give up efforts to restore the 100-plus year-old building.

A structural evaluation of the building has been scheduled for Friday, Mayor Rich Blankenship said.

“Council’s wish at this time it appears is to obtain a demolition price cost,” Blankenship said Wednesday. “But the first thing we want to do is the evaluation.”

The building’s demolition was the topic of discussion at a recent joint meeting of the public utilities and finance committee of the Ironton City Council. The city currently owns the building.

“We’ve got to do something with this property, as a city,” Councilman Kevin Waldo said. “It’d be my opinion at this time, three years after we started, that we ought to tear it down.”

Councilman Mike Lutz agreed, saying it was is not right of the city to hold on to the building while telling its residents to tear down their dilapidated houses.

“That’s a little hypocritical in my opinion,” Lutz said.

The city had planned to transfer the building to the veterans group. The plan was to transfer Memorial Hall first to the Ironton Port Authority.

The port authority was to then transfer the building to the veterans group, if it could raise the first half million dollars towards the restoration within two years, IPA chairman Paul Woods said. The arrangement was made about a year ago.

“It’s a city problem right now and it will be a city problem until someone can raise the money,” Woods said. “Apparently the American Legion is no longer interested.”

Members of the group had hoped to receive a grant from the federal government for $2.4 million over the course of 10 years, said Tom McClain, a trustee of the Veterans Memorial Hall Restoration Fund, a nonprofit founded for the purpose of the restoration. Besides McClain, two other members of the American Legion Post 433 are also trustees of the fund. In order to get that grant, the nonprofit had to own the building, he said.

McClain said the organization raised about $20,000 toward the restoration, minus the cost of advertisements and some other materials.

“We were fighting a losing battle,” McClain said.

McClain said the building is a part of the history of Ironton that will be lost.

The building used to be the center of attention in the city, he said, adding that the Memorial Day parade once started there. A United States president visited the hall during the early 1900s. The architect who designed the structure also designed buildings at Ohio State and the Ohio governor’s mansion, he said.

“Now it’s going to be destroyed because the city was supposed to keep it up,” he said.

Inaugural event offers variety of workshops PROCTORVILLE — It’s a chance to learn while having some fun and sharing experiences... read more