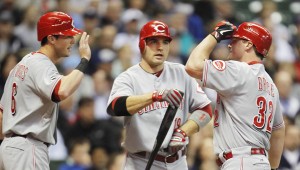 Cincinnati Reds' Jay Bruce (32) is congratulated by teammates Drew Stubbs (6) and Joey Votto (19) after he hit a two-run homer in the 3rd inning against the Milwaukee Brewers at Miller Park, in Milwaukee, Wisconsin, Monday. (MCT DIRECT)

MILWAUKEE (AP) — Dusty Baker shook up his lineup looking for answers with Scott Rolen on the disabled list. Brandon Phillips took advantage of being back in a familiar spot.

Phillips went 3 for 4 and drove in three runs hitting fourth, Jay Bruce added a two-run homer and the Cincinnati Reds used a six-run third inning to beat the Milwaukee Brewers 9-5 on Monday night.

“I came through, and I’m glad I did because we really needed those runs,” said Phillips, who has batted cleanup 343 times in his career. “The changes to the lineup really woke us up a bit.”

Baker said he’ll continue shuffling the lineup to look for the right combinations.

“That’s what we’re going to have to do, especially until we get Scotty back,” Baker said of his third baseman. “I’m just glad we got Brandon hot.”

Already ahead 1-0, the Reds sent 11 batters to the plate in the third, holding Chris Narveson (1-1) to his shortest outing in 38 career starts.

Cincinnati had eight hits in the inning one night after managing just four in a shutout loss to St. Louis. Bruce homered and Phillips, Jonny Gomes, Ryan Hanigan and even Bronson Arroyo (3-2) drove in a run each to give Cincinnati a 7-0 lead.

Arroyo pitched effectively into the seventh to snap his two-game losing skid.

“It’s always fun to get that many runs early. It makes it that much easier for you to pitch it (with) less effort,” Arroyo said. “I went out there in some of the middle innings and was just cutting a bunch of balls at 80 miles an hour just to preserve energy.”

Milwaukee’s Ryan Braun continued his torrid stretch with a two-run homer in the ninth.

Phillips was in the fourth spot for the first time this season and Bruce moved up to second. Everything worked for the Reds, who had been hitting .229 in a 3-8 stretch coming into the series against the Brewers.

“We’re coming together, it’s about that time,” Phillips said. “Good teams are going to go through things like that.”

Even with the slump, the Reds lead the National League in runs (123), home runs (28) and RBIs (119) and powered past the Brewers for the fourth straight time this season after a season-opening sweep.

Narveson had thrown 13 scoreless innings in his two home starts at Miller Park, but he brought his road struggles back to Milwaukee by lasting just 2 1-3 innings. In his last three appearances, he’s 0-3 with an 8.35 ERA.

“He didn’t have it,” Brewers manager Ron Roenicke said. “Everything was elevated. I don’t want to make excuses, but he was sick yesterday. He was better today, definitely better today. But I know he wasn’t 100 percent. Hopefully that is the reason he was up in the zone, but he was up. Everything he threw was up.”

Milwaukee cut it to 7-1 in the fifth after Jonathan Lucroy doubled and shortstop Paul Janish threw Erick Almonte’s grounder into the Brewers dugout for an error.

Arroyo left with one out in the seventh and runners in scoring position and reliever Logan Ondrusek allowed a sacrifice fly by Carlos Gomez that made it 7-2. Lucroy drove in a run in the eighth off Nick Massett to make it 7-3.

Phillips hit a two-run single with an out in the ninth and Braun’s homer in the bottom of the inning was the final margin.

“Getting those two runs ended up being a big, big difference because Braun hit that two-run homer and then it would’ve been a two-run game,” Baker said. “It shows you how important every run you score is on the outcome.”

Joey Votto doubled in the third to reach base safely in all 23 games this season. Votto was robbed of another hit in the sixth when Gomez, in center field, made a diving catch that included a double somersault.

Braun extended his hitting streak to 10 games after being named NL player of the week earlier Monday and signing a $105 million extension on Thursday. He’s reached base safely in all 22 games to start the season, one short of the franchise record to begin a year set by Robin Yount in 1983.

NOTES: Reds RHP Johnny Cueto (right upper arm) is scheduled to make his third rehab start for Triple-A Louisville on Tuesday. Cueto is 0-2 with a 16.20 ERA in his first two appearances. … Roenicke said All-Star RF Corey Hart (oblique) will return either Tuesday or Wednesday, depending on a number of factors. Hart will immediately return to starting in right. … Roenicke said he hadn’t seen the Cooper’s hawk that attacked another bird and captivated most of the crowd during the third inning of Sunday’s 4-1 win over the Astros. “Hopefully it flew back out,” he said.

By JIM WALKER Tribune Sports Editor PROCTORVILLE — It’s not the number of hits but when you get them. The... read more