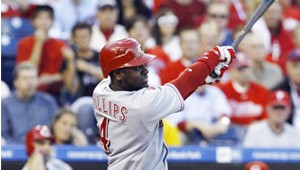 Cincinnati second baseman Brandon Phillips accounted for all the team’s offense with a two-run homer as the Reds lost to Milwaukee 3-2 on Tuesday. (MCT DIRECT)

MILWAUKEE — Mike Leake pitched well enough to win. The Cincinnati Reds didn’t give him much support.

Rickie Weeks, Ryan Braun and Prince Fielder all hit solo homers Tuesday night and the Brewers beat the Reds 3-2 for the first time this season.

“We didn’t have a lot of offense today,” Cincinnati manager Dusty Baker said.

Milwaukee had been 0-4 against the Reds this year and losers of 19 of 22 against them before Weeks homered off reliever Logan Ondrusek (2-2) to lead off the eighth and snap a 2-all tie.

“Off the bat I thought it was just going to be in the gap, maybe off the wall,” Ondrusek said. “But, sometime the ball flies a little different.”

It was Leake’s second consecutive solid outing since being arrested for shoplifting in Cincinnati on April 18, accused of attempting to steal six T-shirts.

“He’s pitched great since then,” Baker said. “Hopefully he’s gotten better and matured, and will be as good throughout the course of the year. He was outstanding tonight.”

Except for the two pitches to Fielder and Braun.

“I was just trying to get a strike,” Leake said of the pitch to Braun. “I forgot he was a swinger.”

Brandon Phillips was back in the cleanup spot and hit a two-run homer in the fourth to give Cincinnati a 2-1 lead, but it wouldn’t last.

“Their big boys hit home runs,” Baker said. “Our big boy, Brandon, hit a home run. All the runs were scored on home runs. This park has turned into a hitters’ park, so when you have a score of 3-2 it’s really a pretty low-scoring game.”

The rest of the Reds were quiet. After 12 hits on Monday, Cincinnati had two off starter Marco Estrada over seven innings, and one was by Leake. Neither Loe nor Axford allowed another.

Kameron Loe (2-1) worked the eighth and John Axford threw a 1-2-3 ninth for his fifth save.

Braun is the reigning NL player of the week and well on his way to repeating the feat with his current pace. He’s homered in five of his last seven games and has an 11-game hitting streak, batting .413 over the stretch.

Phillips was back in the cleanup spot and drove in two more runs with his homer in the fourth after knocking in three runs in a 9-5 win in the series opener on Monday.

Joey Votto reached base safely to extend his streak to 24 games.

NOTES: Brewers RF Corey Hart (oblique) was activated just before the game, instead of Wednesday as planned, because INF/OF Erick Almonte (concussion) was hit in the forehead by a thrown ball during batting practice. … Hart received a standing ovation when he pinch hit in the seventh. … Almonte became the first major leaguer placed on the new seven-day disabled list established specifically for concussions. … Reds left fielder Jeremy Hermida is hitless in 12 at-bats this season.