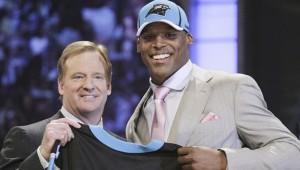 NEW YORK (AP) — Cam Newton’s selection as the No. 1 pick turned out to be one of the few predictable elements of this most unusual NFL draft.

While the league’s labor dispute played out in the courts, and the commissioner struggled to speak over a howling crowd chanting “We want football,” the draft got under way Thursday night with some surprises.

Newton was not one of them.

The Auburn quarterback and Heisman Trophy winner went to the Carolina Panthers —the worst team in the league — and vowed to immediately fix that. Newton led Auburn to an undefeated season and its first national championship since 1957.

“I’m ready to change this whole organization around, to go from worst to first,” he said. “Just being a Panther is the most special part about this.”

Not so special but certainly unusual was Commissioner Roger Goodell getting booed as he prepared to conduct a moment of silence for victims of the devastating storms that ripped through the South. He responded to their chants for football by saying, “I hear you. So do I.”

Then he was bear-hugged by a player who is suing the league.

With the second pick, Denver took Texas A&M linebacker Von Miller, a plaintiff in the antitrust lawsuit players filed to block the lockout. He strode across the stage with tears in his eyes and embraced Goodell.

“I’ve never had anything against Roger Goodell,” Miller said. “I just want to make sure football continues to get played. When I walked across the stage, I was meeting the commissioner. That was it.”

It was a strange opening for what normally is a festive occasion. In this offseason of labor strife, the league’s first work stoppage since 1987 temporarily ends Friday. The 32 teams will resume business in compliance with U.S. District Judge Susan Richard Nelson’s order to lift the lockout.

Then again, the lockout could be back in place if the NFL wins an appeal. If that happens, Newton, Miller and all the players chosen Thursday night would be thrown back into a labor limbo.

For now, they will be allowed to report to their teams, meet coaches and get playbooks. Contract negotiations are uncertain until the league announces its rules for the 2011 season — rules that might be in force for only a short time if an appeal is granted.

The draft was never in danger of being held because it was protected under the old collective bargaining agreement that expired in March.

Moments before the annual spring ritual got under way, Goodell requested a moment of silence for victims of Wednesday’s storms, which left at least 280 people dead in six states and hundreds more injured. On stage, he was surrounded by the Auburn and Alabama stars and their coaches.

Of those stars, none shined brighter than Newton, who has shown he can handle the heat of a spotlight. He turned in a sensational 2010 season while the NCAA investigated his recruitment. Newton’s father, Cecil, has admitted soliciting money from Mississippi State during the recruiting process, but said neither the player nor Auburn knew about the pay-for-play attempt.

With the third pick, Buffalo selected Alabama nose tackle Marcell Dareus, who gave Goodell an even bigger hug. Of course, Dareus weighs 308 pounds, about 70 more than Miller — and at least 100 more than Goodell.

“I wanted to give him a hug because I finally made it to the big dance,” Dareus said.

Cincinnati, perhaps calling the bluff of quarterback Carson Palmer, who is demanding a trade, instead took the top receiver in this crop, A.J. Green of Georgia.

Arizona, also in need of a quarterback, selected the top cornerback available, Patrick Peterson of LSU.

The labor strife caused speculation not many trades would be made Thursday. But just six picks in, Atlanta cut a massive deal with Cleveland and moved up from No. 27 to grab Alabama receiver Julio Jones — the fifth Southeastern Conference player in the first six.

Aside from bear hugs by litigants, what Atlanta and Cleveland cooked up was especially stunning.

“We knew it was going to be an aggressive move and cost us,” Falcons GM Thomas Dimitroff said. “As an organization we felt very strongly about the move for a player who truly adds the explosive, urgent athleticism we’re looking for …”

That began a small run on passers. After Dallas went for offensive tackle Tyron Smith of Southern California with the ninth pick,

Jacksonville saw a chance to get its future quarterback. The Jaguars moved up six slots for Missouri’s Blaine Gabbert, dealing their first-round pick and a second-rounder to Washington.

“You really don’t have any idea where you will go, especially with the lockout,” Gabbert said. “But the trades are happening now.”

Houston bolstered its weak defense with Wisconsin end J.J. Watt at No. 11 before yet another QB was chosen: Florida State’s Christian Ponder, who impressed Minnesota with his workouts leading up to the draft. That made for four QBs in the first dozen selections — and no other quarterbacks went in the opening round.

Auburn DT Nick Fairley, once projected as a top-three selection, was chosen 13th by the Lions. It was a head-scratcher because the Lions already have a star defensive tackle in Ndamukong Suh, the 2010 defensive rookie of the year.

St. Louis, undeterred by Robert Quinn’s lost season — the linebacker-end was suspended from North Carolina for his role in an agents scandal — took him at No. 14.

Mike Pouncey, whose twin brother, Maurkice, was a sensational rookie center for Pittsburgh last year, was chosen by Miami to play the same position.

After moving down to No. 16, Washington took Purdue LB Ryan Kerrigan. Cleveland traded again, from No. 27 to 21st for Baylor DT Phil Taylor, with Kansas City sliding to 27th.

One player who dropped from a projected top-10 slot to 19 was Nebraska cornerback Prince Amukamara, who wound up with the Giants.

Former firefighter and hockey player Danny Watkins went to Philadelphia. The Canadian guard from Baylor apologized to Giants fans in the audience who booed him for going to the rival Eagles. Watkins was told to get used to such treatment in New York.

Baltimore passed after using all 10 minutes at No. 26 and Kansas City, in the next slot acquired through Atlanta and Cleveland, swooped in. The Chiefs got Pitt wide receiver Jonathan Baldwin while the Ravens still pondered their pick.

Mark Ingram, the 2009 Heisman Trophy winner, went 28th overall to New Orleans, which traded with New England to get the spot. The Saints surrendered a 2012 first-rounder for the Alabama running back, giving them two Heisman winners in their backfield — sort of. Reggie Bush won the award in 2005, but he relinquished it after an NCAA probe found he accepted improper gifts while playing at Southern California.