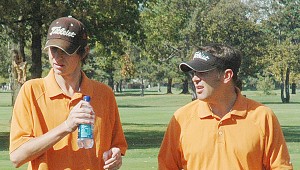 Some babies are born with a silver spoon in their mouth. It could be argued that Jeff Kerns was born with a golf club in his hand.

Kerns has had a life-long love affair with golf that made him an All-Ohio golfer for the Ironton Fighting Tigers, a college golfer and eventually the head golf coach of his alma mater.

The two-time Southeast District Coach of the Year, Kerns will be honored at this year’s Ohio High School Golf Coaches’ Association Clinic with the Boys’ Sportsmanship and Integrity Award.

The award is a rotating award among the state’s districts and given each year to a coach nominated by the district board.

“There’s no other sport where you call a penalty on yourself. It was special because it was voted on by the coaches’ association. It’s the people you’re playing against day in and day out,” said Kerns.

Ironton has made 11 state tournament appearances with three state titles from 1995-97 and two runners-up. Kerns was a member of the 1985-88 teams including the 1987 team that was fourth in the state meet. He qualified as an individual in 1988 and was fourth overall earning first team All-Ohio honors.

Kerns began playing when his father introduced him to the game at the age of 3.

“I’ve been around the game all my life. As much as I love the game — and it’s a great game and it’s given us a lot of great times — it’s a cruel game a lot of times,” said Kerns.

“I’ve met a lot of good people and good coaches and traveled to a lot of places.

But you have to realize that as soon as you get comfortable (with the game) it can tear your heart out.”

Since taking over the program in 2001, Kerns has coached Ironton to state tournament berths in 2005 and 2009. His son, Nathan, qualified as an individual in 2007 and 2008 and earned All-Ohio honors.

Nathan is now a sophomore on the Marshall University golf team and recently finished tied for 19th in the Conference USA tournament as the Herd placed seventh, its highest finish since joining the league.

Kerns also coached Seth Christian who qualified for the state tournament individually in 2004.

Kerns said he has learned to appreciate his son’s talents more so now than when he was on the Ironton team.

“Looking back at that, Nate’s playing Division I golf. I took for granted how talented he was in high school. I saw him all the time and played with him,” said coach Kerns.

“He’s the best player I have ever coached. I appreciate it more now that he’s at college. It’s hard playing for your father. He’s worked very hard at his game. I’m very proud of him and what he’s done with his game. He’s done a lot for Ironton and the program.

Kerns said he appreciates his other players for what they have done both for the program and in their lives, such as former player Gavin Harbolt who now owns the driving range in Wheelersburg.

“I think the rewards of being a coach is being able to see that. I can call Gavin anytime or the kids who played for me. They will stop by the house when they are back in town. I’m proud of what they do on and off the golf course,” said Kerns.

“Kids will stop and help us. There is no reward I can get if I don’t have kids who are willing to work and accept what I teach them. Awards are nice, but you don’t do it for awards.”

But even more than his players, Kerns pointed to his wife, Heather, and children Nate and Maddie for their support.

“Without the support of my family, none of what I do is possible. I’m a truly blessed guy,” said Kerns.

There’s something about a number when there’s a dollar sign next to it that makes people sit up and pay... read more