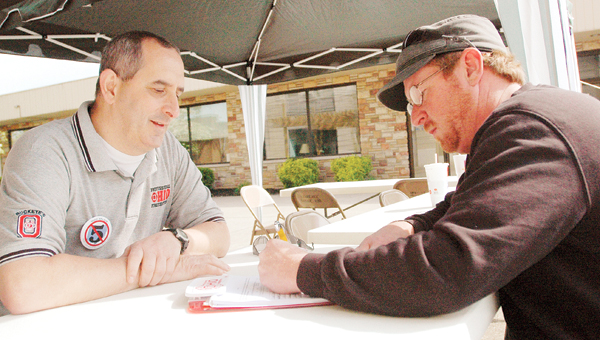 Joe Stevens, with the International Association of Firefighters, watches as Ralph Waller signs a petition against Senate Bill 5 Saturday morning in Ironton. THE TRIBUNE/JESSICA ST JAMES

In an effort to have the people of Ohio decide the ultimate fate of Senate Bill 5, its opponents took to the streets of Ironton Saturday.

Representatives from several local unions met at the Rotary Fountain at Third and Center streets in Ironton to solicit signatures to get the referendum on the ballot for November.

Approximately 232,000 signatures statewide are needed to get the bill on the ballot for November. Locally, petition organizers are hoping to collect 8,000 signatures from Lawrence County.

“We don’t anticipate a problem (getting the signatures) in our county,” said Pam Wagner of the local Fraternal Order of Police.

“You don’t have to be for or against it,” Wagner said. “We want it on the ballot. Obviously there’s a lot of people in Columbus that don’t want to listen to us.”

Sandra Shonborn, of AFSCME Ohio Council 8, called SB5 an attack on the middle class. She later said the only thing good to come from the bill was that it has united unions against it.

Shonborn came from her office in Athens County for the rally.

“I was hoping for a better turn out but that could turn around,” she said around noon. “I look for people to stop in when they have their running done.”

Opponents of the bill solicited signatures from 10 a.m. until 7 p.m. Saturday.

Rally organizer Kristi Hall said plans have been made to solicit signatures during the Gus Macker basketball tournament as well as the Memorial Day Parade.

“We’ll go to the people where we know they’re congregating, to get them to sign the petition,” Hall said. “We just want this to run as smoothly as possible and the support has been amazing.”