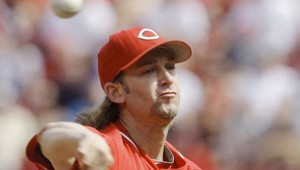 Cincinnati pitcher Bronson Arroyo suffered his third loss as the Reds fell 9-5 to Florida on Sunday. (Courtesy of the Cincinnati Reds.com)

CINCINNATI (AP) — Some deficits are too big for even the power-laden Cincinnati Reds.

Bronson Arroyo and the Reds gave up five home runs to the Florida Marlins, including Hanley Ramirez’s first of the season, and Cincinnati lost 9-5 on Sunday.

The Reds, who came into the game leading the NL in homers and runs, scored twice in the ninth on pinch-hitter Chris Heisey’s bases-loaded double and had the tying run at the plate. But MVP Joey Votto ended the rally with an easy chopper to closer Leo Nunez.

On Saturday night, Cincinnati scored three runs with two outs to tie the game in the eighth before winning 4-3 in 10 innings.

The Reds also had the Marlins sweating on Friday, when they scored two in the ninth and had the tying run at second base before Nunez got Jay Bruce with a called third strike.

Arroyo (3-3), who allowed a season-high three home runs, felt bad about the position Cincinnati’s offense is being put into by the pitching.

“It’s harder to play from behind than it is when you’re ahead and you can relax a little bit,” said the right-hander, who gave up seven hits in seven innings while falling to 1-3 in his last four starts and 0-3 in 10 career appearances against Florida.

The Reds fell to .500 for the fifth time in the last 10 games. They’ve alternated wins and losses since a four-game losing streak from April 17 through April 20 while being unable to put together a consistent run and frustrating manager Dusty Baker.

“The hard part today was we couldn’t keep the ball in the ballpark,” Baker said. “Boy, they hit some bombs.”

Florida right-hander Ricky Nolasco (3-0) allowed three runs and six hits in seven innings to help the Marlins take two of three in the series. He struck out five and walked one.

Ramirez started the flurry of homers with a two-run shot on an 0-1 pitch with one out in the first inning. The drive into the left-field seats was his first homer since Sept. 6 — including spring training.

“I’m not concerned about his numbers,” Edwin Rodriguez said. “I am more concerned with how he is handling the slump. I know the numbers will be there. So far, he’s handled it well.”

Bruce tied the game in the bottom of the first with his fifth homer of the season.

Votto followed by drawing a walk, extending to 28 his major league-leading streak of consecutive games reaching base at least once with a hit, walk or being hit by a pitch. He is six away from tying the club record of 34 games to start a season, set by Dave Collins in 1981.

The Marlins regained the lead at 3-2 with Greg Dobbs’ leadoff homer in the second.

The Reds tied the score again on Brandon Phillips’ fourth homer, an opposite-field drive into the right-field seats with one out in the sixth.

The Marlins broke the game open in the eighth, scoring four runs off Cincinnati reliever Nick Masset with two outs.

Stanton cracked a 442-foot solo drive to center field, his third homer of the season. After Dobbs walked and Buck singled, Emilio Bonifacio hit drive into the right-field seats for his first home run to leave park. His only other career homer in 902 career at-bats was an inside-the-park grand slam on opening day in 2009.

“Nick had been throwing the ball outstanding,” Baker said. “The pitch to Stanton was a fastball, and he threw a hanging breaking ball to Bonifacio.”

NOTES: Reds RHP Johnny Cueto needed 99 pitches to get through 4 2-3 innings of his rehab start Sunday with Triple-A Louisville. Cueto allowed five hits and one earned run with two walks and six strikeouts. … According to the Elias Sports Bureau, Florida RHP Josh Johnson’s 18 hits allowed in 41 innings are the fewest by any pitcher with at least 40 innings since 1900, one fewer than the 19 allowed by Nolan Ryan in 1978. Johnson’s 0.88 ERA is the fourth-lowest of pitchers with at least 40 innings through the end of April since 1913, when earned runs became an official statistic.