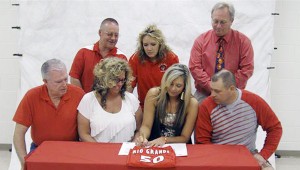 PEDRO — From the Redwomen to the RedStorm, Brittany Thompson is Ready.

The Rock Hill Redwomen senior two-sport standout is more than ready to play at the next level after she signed a letter-of-intent to play volleyball and basketball for the University of Rio Grande.

“I am really excited to get the chance to play basketball and continue playing volleyball after high school,” said Thompson who was a two-time All-Ohio Valley Conference volleyball player and served as team captain this past season.

“I’m glad I made this decision. By picking this college, I now feel like I have someplace to call home after I graduate.”

In basketball, the 5-foot-10 Thompson averaged 10.3 points, 12 rebounds, three steals and four blocked shots per game last season for the Redwomen and was named to the All-OVC second team.

A Wendy’s High School Heisman winner for Rock Hill, Thompson carries a 3.5 grade point average and has been president of the Health Academy the past two years.

“I have chosen Rio Grande because it’s a small college and I would be able to focus on getting my nursing degree and be able to play sports. I really wanted to continue playing sports but stay close to home,” said Thompson.

RedStorm women’s basketball coach Dave Smalley was looking to add more local talent to his program and liked what he saw in Thompson.

“Brittany is a very, very solid student looking to major in nursing and I believe that will certainly be a positive for her as our women’s basketball program has a great relationship with the nursing program at the university,” said Smalley.

“We feel that there is good basketball in this area and we’re excited to have some of the better players in our immediate area coming to our institution.”

Thompson played center for the Redwomen but Smalley plans to move her to the wing.

“I think she has some nice skills and good talent that at our level in the Mid-South (Conference) we’re probably going to have to face her up on the perimeter a little more and then she can rely on her experience on the inside to get a little exposure in the paint,” said Smalley.

“Primarily we will look at her at a three spot and I think once Brittany learns our system, I think the future is bright for this young lady.”

“Brittany has as much potential as any kid that I have ever been involved with,” said Carpenter. “Anytime you show her something, she works hard on it and gets better.

“The only problem she has sometimes is that she doesn’t realize just how good she can be.”

Doing double duty by adding volleyball to the mix was something that just evolved for Thompson.

“I knew a few friends who went to school there but none played sports. I was actually introduced to Rio volleyball through a few camps they threw (at Rock Hill),” said Thompson.

Redwomen volleyball coach Julie Mootz was glad to see her player get the opportunity to play in college.

“The number one this is she is very coachable. Whatever I ask her to do, she does. If I told her to jump, she asked me how high,” said Mootz.

Brittany is the daughter of Greg Thompson and Ruth Ann Thompson of Ironton.

CINCINNATI (AP) — All the Reds had to show for a long, cold afternoon was one hit heading into their... read more