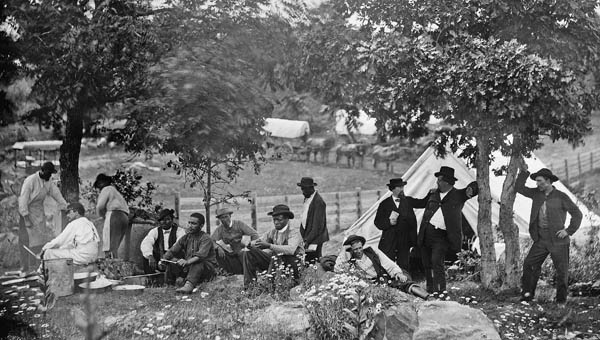 Lincoln now “had no alternative but to accept the war instigated by South Carolina or the Southern Confederacy.”

James Buchanan, our 15th President, was also our most irresolute President. Our only bachelor President, “Old Buck,” was pressured by events that could have brought on the Civil War in his administration.

Buchanan’s thoughts and actions regarding this request saw three of his cabinet members resign. After much analysis and discussion, President Buchanan gave permission for the Star of the West to relieve the men in Fort Sumter.

This side-wheel steamer was said to be bound for New Orleans and Havanna, her usual ports. The Star of the West left New York on Jan. 5, 1861, on a secret mission.

Around 7 p.m., another steamer, the Lockwood, carrying a secret cargo of 200 Federal troops, came up to the Star. The troops, under 1st Lieutenant Charles R. Woods, came aboard the Star of the West and hid themselves down below.

Captain John McGowan, in charge of the paddle-wheel freighter, was the only person on board to know of the ship’s mission. The Star of the West had been “rented” by the Federal Government from M. O. Roberts Shipping Line. Marshall O. Roberts agreed to lease it for $1,250 a day and no fuel costs. The only weapon on board was a 20 x 40-foot American flag that the captain would hoist if his ship was fired upon.

A New Yorker had asked the crew before the ship left: “Headed down for Fort Sumter, are ye?” Spies had already informed South Carolina’s governor about the Star coming to reinforce Sumter.

Major Robert Anderson and his men knew nothing of this mission—the communication was sent by regular mail and did not arrive in a timely manner.

The men below deck on the Star sang “Away Down South in Dixie” 20 times that first day. Just after 3 a.m. on Jan. 9, 1861, the Star was just outside the Charleston bar.

The General Clinch, a southern vessel, fired rockets and flares to alert some gunners from the Citadel. At 7:15 a.m., “the first shot of the Civil War at the American flag” was fired.

On Jan. 9, the Star of the West decided to “run the gauntlet” and get to Fort Sumter, but Sumter was not giving it protective fire. The Star left the firing range of gunners on Morris Island, but ran into firing from even bigger guns from Fort Moultrie.

Major Anderson and his men did not know of the attempted reinforcement and decided not to fire from the Fort.

A half mile from Fort Sumter, Captain McGowan ordered the Star of the West to head back out to sea.

Some 20 shots had been fired by the soldiers from South Carolina and only two had hit the Star. The ship, captain, and 200 “green” soldiers headed back to New York. The American flag had been fired upon. Would there be war?

President Buchanan did not consider this attack on the Star of the West as an act of war because no blood had been shed.

He knew the United States Army was not big enough or good enough to fight a war. This Presbyterian President prayed that his term would end quickly—without a war. The Northern tide of public opinion would shift against the South over this incident.

The Confederacy captured the Star of the West at Indianola, Texas, in April of 1861. In March of 1863, the ship was sunk in the Tallahatchie River to prohibit Union navigation on the River.

Animal bites should be taken seriously

Last Friday started out just like any other day. One of our regular cat clients came in to get groomed.... read more