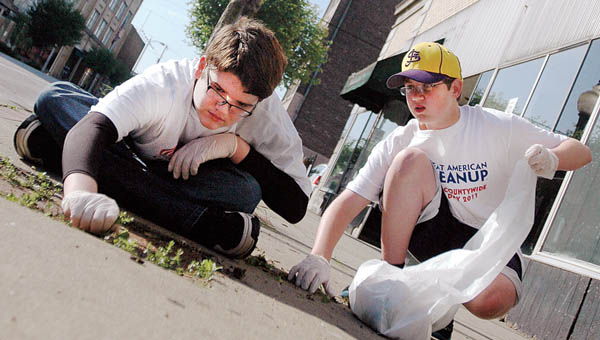 Cooper Adkins, left, and Joey Bush spend the morning weeding, mulching and picking up garbage with other students from the Ironton Catholic Schools during the Lawrence County Cleanup Day 2011 event Saturday morning.

It was a day for the early birds as civic, school and church groups came out in full force to clean up the place they like to call home.

Members of Ironton In Bloom started hanging the pole planters filled with zinnias and petunias that decorate the downtown at 7 a.m. Saturday.

In less than an hour gardening enthusiasts were lined up by the municipal parking lot on South Second Street to buy the plants that didn’t make it into the planters.

“The sale went really, really well,” Carol Allen, of Ironton In Bloom, said as she took a break from waiting on customers. “They are very happy and saying ‘I love the Ironton flowers. They remind me of the flowers blooming in Ironton and we love it.’”

Decked out in her Ironton In Bloom T-shirt, Allen looked up at the planters along South Second Street.

“The city will be shining for Mother’s Day,” she said.

Up and down the city streets crews of volunteers were weeding, mulching and even planting a few more blossoms to mark the beginning of the growing season.

Tim Dickess, a seventh grader at St. Joseph High School, has come out for the past three May cleanups to help in the effort.

“It is nice to do for Ironton,” Dickess said.

Joining him was classmate Sydney Wain who was participating for the first time this Saturday.

“It is cleaning our community for other people to see,” Wain said.

Over on the next block a group of sophomores from St. Joseph were checking out if any of their friends needed any help.

“This is to clean up Ironton to make it look better,” Justin Mahlmeister said. “How it used to be a great town. We like to clean it up.”

Other groups who participated in Ironton included Central Christian Church youth, the Ohio Valley Youth Association, Resurrection of Hope Church and 4-Hers.

Enthusiastic volunteers were throughout the county Saturday morning picking up trash along the roadways and filling up rolloff containers set up by township trustees.

By noon both Union and Rome townships were on their 15th roll off container.

“We are having a huge turnout in the eastern end as well,” Dan Palmer of the Lawrence-Scioto Solid Waste District, said. “And I am really pleased with the Ironton turnout.”

Palmer spent the day loading up the bags of weeds and tree clippings that volunteers had left throughout the city streets. By noon he had picked up 145 bags and was going back for more.

“The weather cooperated and we have had a fantastic turnout,” he said. “I can’t say enough to commend all the groups and individuals who have worked this Saturday. It says a lot about our county.”

A longtime officer with the Lawrence County Sheriff’s Office is the first to officially seek one of the soon-to-be-vacant seats... read more