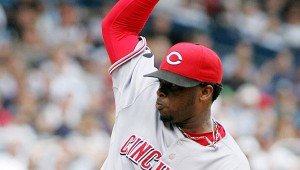 Cincinnati pitcher Jonny Cueto came off the disabled list Sunday and made his first start of the season an impressive one as the Reds blanked the Chicago Cubs 2-0. (The Ironton Tribune / MCT DIRECT PHOTO)

CHICAGO — Johnny Cueto was in midseason form. His 2011 debut for the Cincinnati Reds showed that his arm was sound and his stuff was good.

And now the defending NL Central champs have their starting rotation intact. Three days ago Homer Bailey came back from the disabled list. And on Sunday it was Cueto, who pitched into the seventh in a 2-0 victory over the Chicago Cubs.

“That was a great outing by Cueto,” Reds manager Dusty Baker said. “Took him to his limit, I think. He was still throwing the ball well, but you have to remember that’s his first outing.”

Cueto began the season on the DL with irritation in his right biceps/triceps. He left Sunday’s start after giving up Alfonso Soriano’s leadoff single in the bottom of the seventh. During his 102-pitch outing, he walked one and struck out four.

Cueto, who was activated before Sunday’s game, threw four rehab outings and that helped.

“I wanted to throw that many because it made me feel stronger,” he said. “I felt strong. I felt like I could have kept pitching.”

Four Reds’ relievers completed the shutout. Francisco Cordero pitched the ninth for his sixth save in seven chances, one day after giving up two ninth-inning runs in a 3-2 loss.

Once the Reds get third baseman Scott Rolen off the DL, Baker thinks they can start playing more like they planned. They took two of three in the series at Wrigley Field.

“We’re on a little bit of a roll right now. Hopefully we can get on a big roll,” Baker said.

“This is a team that was slated to be the team,” he said. “Other guys have done a good job for us in their absence, but these guys are my horses.”

One of those horses, first baseman Joey Votto, went 0 for 4 and had his season-opening string of reaching base stopped at 33 straight games, one shy of Dave Collins’ modern club record set at the beginning of the 1981 season.

Jay Bruce’s single, an infield out and RBI single from Ramon Hernandez put the Reds up 1-0 in the second. Stubbs hit a two-out homer in the fifth, a line drive over the wall in left-center.

Dempster (1-4) allowed five hits and two runs with no walks and four strikeouts in seven innings.

“Dempster threw a very good game, too. Great game, it’s just that he was bested by Cueto,” Baker said.

“Anything is better than the way I was pitching,” Dempster said. “I like the way I threw the ball. I didn’t walk anybody.”

The Cubs loaded the bases in the seventh. After Soriano’s leadoff single finished Cueto, Sam LeCure plunked pinch-hitter Reed Johnson and walked Kosuke Fukudome with two outs before retiring Starlin Castro on a grounder to third.

“He’s just not very patient,” Cubs manager Mike Quade said. “He’s just expanding the strike zone too much. As good as he is, guys who pitch at this level will take advantage of that if you’re not disciplined enough.”

Chicago also threatened in the third when Dempster singled and made it to third on an error on shortstop Edgar Renteria, who made an errant flip to second after fielding Fukudome’s grounder. But moments later, Dempster was tagged out trying to score on a grounder to third baseman Miguel Cairo. Marlon Byrd then reached on an infield single to load the bases before Aramis Ramirez flied out.

“We are losing games because we are not hitting the way we like to,” said Ramirez, who is batting. 273 but has only one homer and 12 RBIs in the first five weeks.

“We hit some balls hard, but the wind was blowing in.”

And it’s too early to panic or to make major alterations.

“If you start changing, you are going to struggle,” Ramirez said. “You got to stick. That’s what I told (Carlos) Pena today, just keep swinging, keep doing what you got to do and don’t change anything.”

NOTES: Votto’s career-best streak for reaching base safely at any point in the season is 41 games established last year from May 15-July 3. That streak was snapped when he was ejected in the first inning of a game at Wrigley Field. … Reds INF Paul Janish missed his second straight game with a right ankle injury he got rounding third base in Friday’s series opener. … Virginia Commonwealth basketball coach Shaka Smart, who led the Rams to the Final Four this year, threw out the first pitch to Cubs’ reliever Sean Marshall. Marshall attended VCU. Smart also sang during the seventh inning stretch. … Some players used pink bats, while others and home plate umpire Bob Davidson sported pink wristbands to raise breast cancer awareness on Mother’s Day. Cubs’ left fielder Soriano wore pink colored shoes to honor his mother, who died in January of an apparent heart attack. … Cubs reliever Jeff Samardzija pitched a perfect eighth and now has 14 straight scoreless innings. … Reds pitchers were called for two balks, Cueto in the fourth and Nick Masset in the eighth.