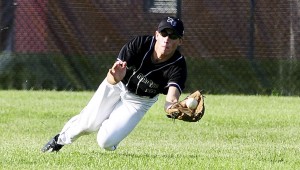 COAL GROVE — Good things come to those who wait.

Completing a game that started last Thursday only to be called after eight innings due to darkness, the Hornets scored twice in the ninth inning on Monday to beat the River Valley Raiders 4-3 in an Ohio Valley Conference game.

Jake Murphy got the win with a five-hitter. He struck out 13 and walked four in going the distance.

The Raiders got a run in the second when Nick Jeffers reached on an error and Trey Noble singled.

The Hornets (4-10, 2-8) rallied for two runs in the third on hits by Levi Morris and Cody Gool, a walk to Murphy and Jared Eldridge’s two-run single.

River Valley tied the game in the fifth on a walk to Noble and Jacob Brown’s base hit.

Coal Grove snapped the tie with two runs in the top of the ninth.

Eldridge doubled and Conor Markins had an RBI single. Garrett Myers singled, Mason Nance walked and Morris hit into a fielder’s choice as a run scored.

River Valley got a run in the bottom of the inning on Noble’s single and Cody Wimmer’s double, but Murphy retired the side to get the win.

In the regularly scheduled game on Monday, Coal Grove took a 4-0 lead only to fall 10-4.

The Hornets not only left 14 runners on base, they were guilt of six errors — all in the Raiders 9-run seventh inning.

The Hornets took a 2-0 lead in the second on an error and singles by Myers, Nance, Gool and Cody Pennington.

Murphy and Eldridge came around to score in the third after being hit by pitches.

Noble had a three-run homer in the Raiders’ seventh inning rally.