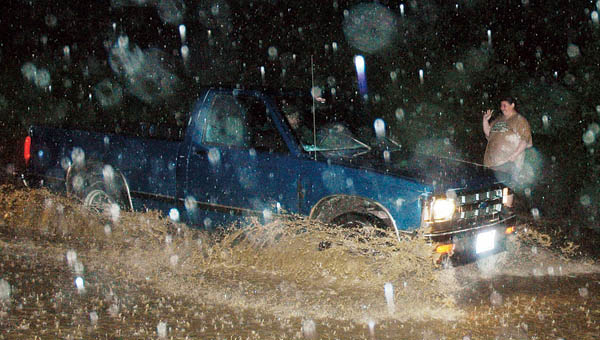 Barbara Burcham, of Perry Township, helps to direct traffic on State Route 243 across from the 243 Pit Stop as she shows motorists the depth of the water over the roadway Tuesday evening. THE TRIBUNE/JESSICA ST JAMES

That was about all an out-of-breath Mike Pemberton, the city of Ironton’s street and floodwall superintendent, could say around 9 p.m. Tuesday as he battled flooded streets across the city and high water at his home in Coal Grove.

“It just came from the amount of rain that has fallen in the last two hours,” he said. “This is something we just can’t control.”

The Tuesday evening commute was anything but ordinary as torrential downpours, heavy winds and near ping-pong-ball-sized hail hammered the Tri-State, flooding roads and downing trees across Lawrence County.

As of 9 p.m., the National Weather Service in Charleston was working frantically to manage all information that was coming in quickly from across the region. Prelimimary reports showed the area received more than three inches in less than eight hours.

The storms began around 5 p.m. and came so quickly that much of the region’s infrastructure was overwhelmed, leaving downed trees and massive pools of water collecting in areas that typically do not.

As of 9 p.m., approximately 2,000 American Electric Power customers were without power, although the numbers continued to fluctuate widely.

The Ohio State Highway Patrol was hammered with phone calls, totaling more than 200 by 8 p.m., according to Dispatcher Drew Frye.

Ohio Department of Transportation officials were not immediately available. State Routes 93, 141, 243 and 650 all were covered in impassible water at various places.

There was high water at the 11-mile marker of State Route 93 and a tree was blocking travel just about two miles north of Ironton on the roadway, according to the OSHP.

Sheriff Jeff Lawless said the storm had created some chaos with a variety of county and secondary roads flooded, although there hadn’t been any major car accidents or any calls for help.

“If you don’t have to be out, don’t get out,” Lawless said. “A small amount of water can cause your car to hydroplane. … Stay home and stay safe.”

But, for those who weren’t home or couldn’t get there, many of the county’s volunteer fire departments were ready to lend a hand.

“We’ve got full crews standing by here at the station, ready to roll,” said Ed Webb, assistant fire chief in Chesapeake. “Whether it be a downed tree or a water rescue.”

Ashland, Ky., was one of the areas hit hardest. Vehicles at the Speedway on 13th Street were nearly submerged as the entire main thoroughfare through the city was basically impassible.

A flash flood warning was in place for Lawrence County until 11:30 p.m. Tuesday. Although the worst of the storm may have passed, forecasts called for more rain Wednesday.

Emergency responders in Jackson County have rescued at least a half-dozen residents and drivers stranded by flash flooding amid heavy rains.

A sheriff’s dispatcher says the rain had lightened up and some areas of high water were receding early Wednesday, while others were still rising. At least two people had to be rescued by boat, and the sheriff’s office was monitoring a woman who was trapped in her home by flooding but refused to leave.

The dispatcher says flooding also covered several roadways and blocked in one of the county’s seven fire departments, keeping it from responding to calls Tuesday night. She says schools were closed Wednesday in the city of Jackson, about 65 miles southeast of Columbus, and one school was inaccessible because of high water.

The Associated Press contributed to this report.