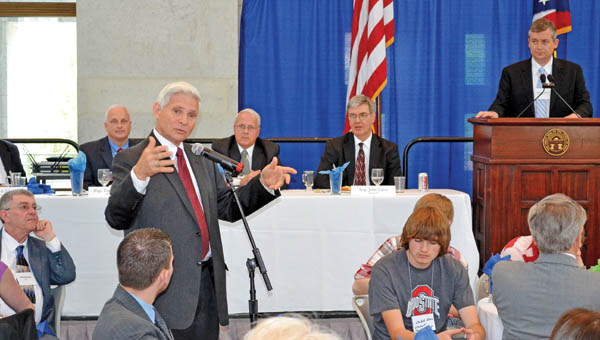 Dr. Bill Dingus. executive director of the Lawrence County Area Chamber of Commerce, addresses the audience during the annual Legislative Day while current Chamber President Doug Korstanje and others look on.

The Chesapeake Bypass, the Ironton-Russell Bridge and improvements in unemployment rates were just a few areas of progress highlighted at the Lawrence County Chamber of Commerce’s 25th Annual Legislative Day at the statehouse in Columbus on Thursday.

“What a milestone — 25 years of you all making sure your voice is heard in the statehouse,” Doug Korstanje, chamber president, said to the nearly 100 people who attended the event, including members of the chamber, business leaders, public officials and 13 Lawrence County high school students.

The groups divided into three breakout sessions, covering the economic development and transportation, as well as a tour of the statehouse for the students, followed by a luncheon with state senators and representatives.

During the sessions, the Chesapeake Bypass was discussed as an active project and is in the testing and design stages during the rest of 2011 and the beginning of 2012. By the fall of 2012, right-of-way acquisition is expected to begin.

“I think we got reaffirmation that we are a tier 1 project and actually have some fixed dates,” said Ralph Kline, assistant director at the Ironton-Lawrence County Community Action Organization.

There is no official timetable yet on bypass construction.

Also noted was that the property acquisition is on track for the Ironton-Russell Bridge replacement project. The project is expected to take a total of about four years to be completed, including demolition of the old bridge.

Bids are expected to be awarded in October. Tim McDonald, of the Ohio Department of Transportation, spoke about a decrease in revenue from federal cuts and a loss of gas tax because of high gas prices, among other reasons.

McDonald also mentioned the consideration of implementing tolls at various places in the state.

Korstanje and Viviane Vallance of the Lawrence Economic Development Corporation, spoke about the positive changes Lawrence County has seen in the last 30 years, after starting with a loss of nearly 2,000 jobs in the 1980s, bringing unemployment for the county to more than 20 percent.

“Now our unemployment level is one of the lowest, No. 2 or No. 3, in the state for the past eight years,” Vallance said of Lawrence County.

Bill Dingus, executive director of the chamber, is pleased with the decrease of people in Lawrence County falling below the poverty level.

“While other places were going further into poverty, we had 1,400 people in Lawrence County climbing out of poverty,” Dingus said.

Ohio Sen. Tom Niehaus, of District 14, was the keynote speaker for the luncheon and had positive things to say about the people of Lawrence County.

“You will not find a more skilled or dedicated workforce than in southeast Ohio,” Niehaus said. He noted the importance of job opportunities in Lawrence County.

“Everything we’ve done up to this point has been about jobs, and will continue to be about jobs,” Niehaus said. “Lower taxes and a good educational system —those are the things that grow jobs and that’s part of our responsibility.”

The current senate president said getting out of the $8 billion deficit is going to require some short-term struggles.

“It’s going to be very painful for a short period of time,” Niehaus said.

Dingus concluded the event, speaking about the benefits that come from making the trip every year, saying 25 years of going to Columbus and being part of the legislative network has been good for Lawrence County.

“Each year we have such support from our officials,” Dingus said. He also had a message about the young people who made the trip.

“Year after year we see individuals coming to these events and I hope some day you will be sitting where our senators and representatives are,” Dingus said. “That will mean we have been successful.”

Flyers climb out of early hole to beat Waterford