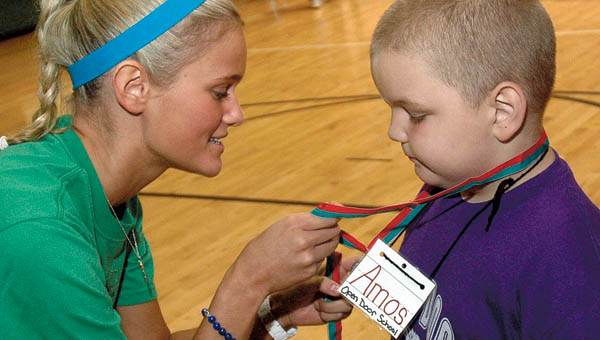 Student athletes give all in annual competition

PROCTORVILLE — With a look of fierce determination on his face, Dustin Stapleton pushed down the track at Fairland Middle School like a charging dynamo to the cheers of his coach Shawn Watson.

Over the finish line first Dustin rushed up to Watson with a high five. Then teacher and athlete ambled over to the prize table to get his 1st medal of the day — first place in the 50-meter dash. And the day was still young at this year’s Special Olympics Thursday.

Dustin, a seventh grader at Dawson-Bryant, has competed in the Olympics for the past two years and works with Watson once a week.

“This gives kids a chance to compete,” said Watson, whose day job is as a sixth grade math teacher at Dawson-Bryant. “They get to meet new kids and see things outside the classroom and have fun.”

Over the loud speaker at the Fairland track the names of other winners blasted across the field.

“We need Andrea Devon to report to the prize table,” the announcer said. “We’ve got another winner, Adam France of Rock Hill.”

As more athletes got on the field for the softball throw, smoke sizzled up from a grill set up by the locker room.

There Kenny Mannon of the county fair board and sheriff’s deputies Jerry Elliott and Scott Wilson were flipping hamburgers and hot dogs, getting hearty food ready for the students’ lunches.

“Great job there,” Frasher said as Sidney Pratt of the Open Door School took the first place medal. “Now are you ready guys for the softball throw?”

Back on the track Blake Moretto of Dawson-Bryant Elementary was showing off the second place medal he got in the softball throw to his teacher Patricia Moore.

“This is wonderful for the kids to build self-esteem and to see they can participate, especially for the older ones,” Moore said. “They can see they can do more than they think. When they are here, everybody is so supportive.”

Help is on the way for residents of Ora Richey Road who have been asking the City of Ironton for... read more