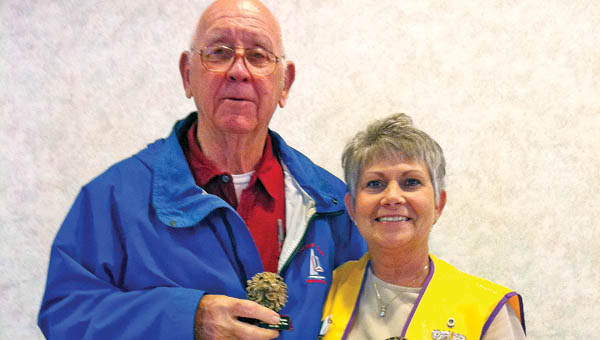 Ironton Lions Club President Lou Pyles presents long-time member Joe Wiseman with a plaque recognizing him as the Zone 7 Lion of the Year.

Ironton Lions Club member Joe Wiseman will have two reasons to celebrate his long-time involvement with the civic club this year.

Wiseman, a member since October of 1986, is set to celebrate 25 years as a member of the club and has been honored as the Zone 7 Lion of the Year.

Wiseman has served as club president in the past and has been the club treasurer for the last 11 years. He is also a recipient of the Melvin Jones Award, the highest honor a Lion can earn.

“He takes an active part in all club activities, serves on several committees and is respected in our community as a trusted Lion,” said club president Lou Pyles.

Born in Waterloo in 1928, Wiseman was educated in rural Waterloo Public Schools and graduated the United States Naval Academy in 1952, where he served in the Navy until 1976 in a variety of command assignments including one as the Commanding Officer of the USS Tusk.

He retired from the Navy with the rank of Commander in 1976.

After his naval career, Wiseman worked in law enforcement with the Lawrence County Sheriff’s Office and currently works on the staff of Craig Allen, Attorney at Law.

Wiseman remains very active in his church, the Christ Episcopal Church in Ironton, maintains his family farm in Waterloo and is an avid high school and college sports fan.