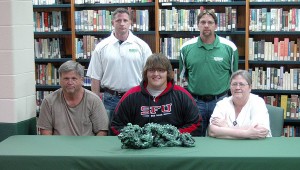 PROCTORVILLE — Maybe Adam Lee’s highlight film will never win an Academy Award, but it won him a spot on the St. Francis Red Flash football roster.

The Fairland Dragons’ senior lineman checked out the St. Francis University website and sent the coaching staff his highlight tape.

The private viewing of the 6-foot-6, 340-pound Lee was just what Red Flash head coach Chris Villarrial wanted and he contacted Lee.

“They looked at my highlight film and when they saw it they called immediately,” said Lee. “They invited me to visit and they said they were very, very interested.”

The film and visit were all it took as the parties hooked up and Lee signed a letter-of-intent to play for the NCAA Division II school in Loretto, Pa.

Lee was a first team All-Ohio Valley Conference selection and special mention to the Associated Press Division IV All-Southeast District team. Although he played both ways at Fairland, he said Villarrial plans to use him on defense.

“They told me there were a few techniques I’ve got to fix and a few to learn and then I’ll be able to play,” said Lee.

Lee talked with other schools such as Akron, Cincinnati, Marshall, Kentucky Wesleyan and Ashland University, but he said he knew St. Francis was the right fit for him.

He also liked Villarrial who was a two-time All-Pro in the NFL playing 11 seasons with the Chicago Bears and Buffalo Bills. Lee said the two linemen have something else in common.

“The environment was awesome and the coaches were amazing. They have places to hunt and that was a good thing. My coach (Villarrial) likes to hunt. I expect to go with him a few times,” said Lee.

Even though Lee is looking forward to a new hunting ground, he said there might not be as much time as in the past.

“It’s going to take more dedication, hard work, concentration and discipline,” Lee said of the step up to the college level.

“I’ve seen a couple of their films. I’ll have to adjust a lot. It’s totally different than high school football. There’s more travel and weightlifting at 6 a.m. I’ll need to be more disciplined than I am now and budget my time.”

Lee is the son of Keith and Pam Lee.

Fairland will keep on playing after 3-1 sectional title victory