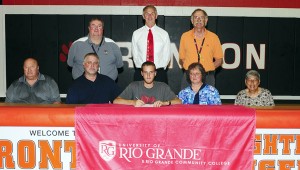 Dustin Moritz decided to make a place he likes to visit more of his home.

The Ironton Fighting Tigers’ senior track and cross country standout found the University of Rio Grande cross country course one of his favorites during the district meet his freshman year.

The course now becomes his home after he signed with the RedStorm and became the first track and cross country athlete signed this year by the boys’ program.

“Ever since I was a freshman and ran the district there I liked it. I was interested in the campus and I always liked being out there,” said Moritz.

Moritz was a key member of the first Ironton cross country team to qualify for the state meet. Ironton finished seventh.

“The state cross country meet was flat the first mile or two. That third mile had such a big hill it really got tough,” said Moritz.

“The league meet my junior year at Marietta was great. We broke the school record and I had my PR (personal record) of 2:03 (800 time).”

Besides running, Moritz also pole vaults and has a best height of 11-feet, 6-inches.

“I like to pole vault. If they gave me a chance I’d pole vault in a meet or two,” said Moritz. “Coach Willey told me I could easily come in and be a main contributor in many events.”

“He probably won’t get as much time as he needs to work on the pole vault, but we might use him,” said Willey.

Moritz understands that he’ll need to follow a tough workout program at the college level much like the one of Ironton coach Tim Thomas.

“I’ll have an advantage from working out with the hills there. It’ll make me better,” said Moritz who said cross country reminds him of camping in the woods due to his scouting career.

“I prefer cross country over track, but I’m better in track. I prefer to run around in the woods as to running around an oval in track.”

Dustin — who plans to major in computer science — is the son of Gary and Vicky Moritz of Ironton.