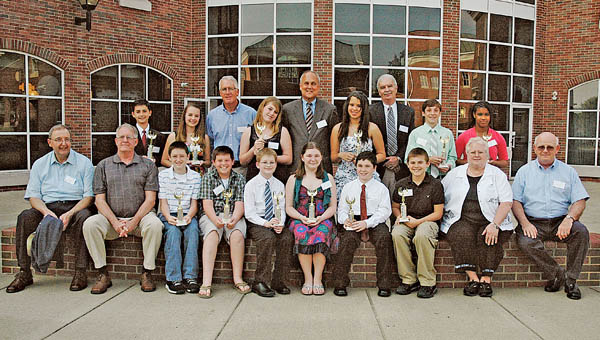 The gleaming gold statuette of Lady Victory has undergone only a slight transformation from the time she was first introduced as the symbol of success for the Eddy Test 50 years ago.

Each spring the statuette is given out to sixth graders in Ironton’s public and parochial schools as the reward for getting top marks on the Ironton Child Welfare Club’s Eddy Test.

The half-century-old version sat proudly at the place setting for Shawn Webster at this year’s Eddy Awards banquet. Webster was one of the first winners of the standardized test given in February is to award academic success.

Webster, now a practicing veterinarian in Butler County and former Ohio Statehouse representative, was at a special Eddy Awards ceremony, where the first winners were invited back to meet the current ones, at Thursday’s dinner at Ohio University Southern.

“I think this is a great tradition,” Webster said. “There, you see mine sitting over there on the table. To have it for 50 years, that says it meant something.”

Webster grew up in a household where academics and sports commingled. His father, Paul Webster, coached basketball at Ironton High School and was later principal at the city’s junior high, before the family moved to the Cincinnati area in 1965.

“This teaches them to have pride in academics and that is needed,” he said.

Hannah Tussey from Ironton Middle School sat patiently with her family, waiting for the ceremony to begin. She is the first in her family to win the award.

“I was so happy that I got it that I ran all the way home,” said Hannah who hopes one day to head to Hollywood to become an actress.

“I was happy,” Kara said about winning.

The young woman would like to become a famous singer after she finishes her studies.

“The test was kind of hard and kind of easy,” she said.

The Child Welfare Club was founded in 1919 by a group of Ironton women led by Mrs. Carl Moulton, who felt their mission was to reach out to the children in the city.

“Our goal has always been to do things for the children and that is something the club wanted to do for children and has continued doing it,” Gallagher said.

Across the Rotunda on OUS’ campus, Isaac Walker from St. Lawrence talked about how he viewed the honor of winning. Isaac’s career goal is to become a CPA.

“I was really excited, super excited,” Isaac said. “The test was hard but I toughed it out. I am really happy, super happy.”

Pastor Charles Lane sits inside the new sanctuary of the First Church of the Nazarene in South Point, now located... read more