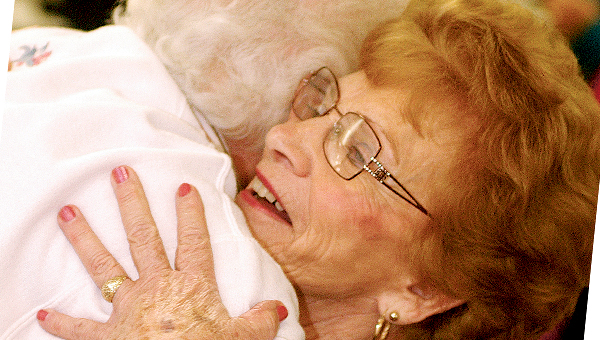 THE TRIBUNE/JESSICA ST JAMES South Point resident Juanita Meadows is congratulated by friends after being named “Senior Citizen of the Year” at the Lawrence County Multi Purpose Senior Center at Sybene Tuesday.

BURLINGTON — Juanita Meadows, known for her volunteer work with the Sybene Senior Center in singing and helping with bingo, received the honor of being the “Senior Citizen of the Year” for 2011.

Meadows, 79, of South Point, was accompanied to the presentation Tuesday by her son and daughter-in-law, Rodney and Debra Black, and a friend, Leon Meade.

Meadows said she started going to the center when her husband was the choir director 20 years ago.

“I love coming here,” Meadows said. “There’s a lot of activities going on. We have bingo, choir, ceramics and an exercise room. Just about anything you’d want.

“It’s a good place to come instead of staying home,” she added.

“You never really know a person until you do bingo with them,” Green laughed in front of the crowd.

She said there have been times when Meadows even brings her grandchildren to the center with her when they are visiting.

As people wanted pictures of Meadows during the presentation, Meadows said, laughing, “I really feel like a celebrity today.”

“Juanita has volunteered and come up to the plate for so many years,” Green said.

“I love to do anything I can do to help others,” Meadows said.

In addition to her title, Meadows received a dozen peach roses and a Bible, with “Senior of the Year 2011” and her name engraved on it.

“I think our seniors look up to her,” Green said. “It gives them a goal to step up to the plate.”

Green thanked Meadows and all past Seniors of the Year.

“Everybody that’s been Senior of the Year… once again, thank you,” Green said.