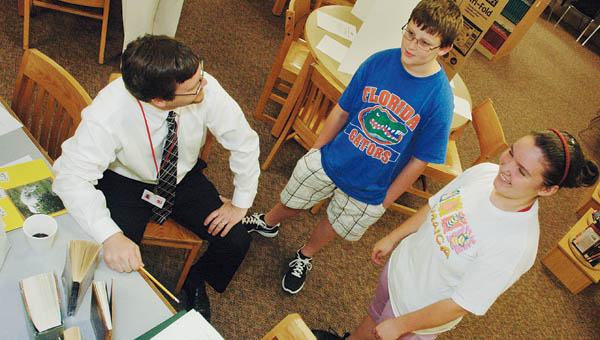 That was the goal of a project assigned to the sixth graders in Margaret Rehme’s reading class at Rock Hill Middle School Wednesday.

Dubbed “Pitch a Good Book, Catch a Good Read,” the assignment was similar to a science or social studies fair in that the students read a book and presented a report about it on a poster board with pictures.

“For the first one I think it turned out really well,” Rehme said. “The kids were very excited about it.”

This is the first year that the Rehme’s class had this assignment. She said she got the idea watching a news story about a class in Putnam County, W.Va., that did a similar assignment.

Rehme required her class to read one book per month. The students got to pick which book to use for the project. Some of the chosen titles were “Harry Potter,” “Twilight,” “My Sister’s Keeper.”

“It was a mystery and I like mysteries,” he said.

The sixth grader said he didn’t like reading before Rehme’s reading class.

“We had to read a book each month and that really got me into reading,” he said.

Alexis Brammer, 12, picked the third book in the Harry Potter series, “Harry Potter and the Prisoner of Azkaban.” She is currently reading the fifth book in that series.

“(I like) the whole magic stuff,” Brammer said of the series.

Rock Hill Local School District staffers judged the students’ projects on how well they identified the elements of literature in the books, neatness, creativity and overall presentation.

Rehme said she was surprised at how much interest her students — and especially the boys — took in the books they read.

“They just really worked and worked well with it,” Rehme said, adding that she wants to have the students do the project again next year.

The teacher said she hoped her students grew to love reading.

“They can go anywhere with reading,” she said. “They may not be able to afford a plane ticket but you can get there.”

When a person is having a heart attack, every second counts. St. Mary’s Medical Center understands this and offered a... read more